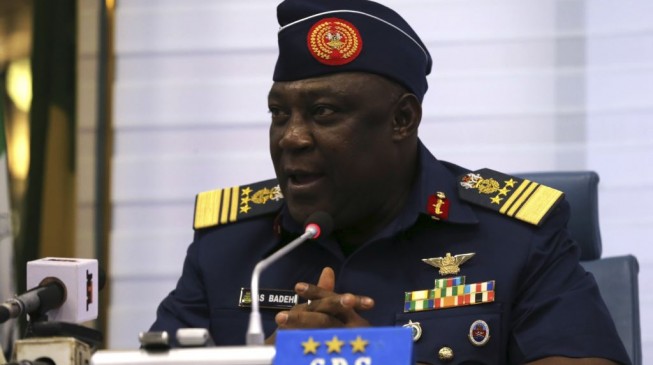 10:50 2018
Print This Article Share it With Friends
👤by Mansur Ibrahim  0 Comments
Advertisement

The incident happened while he was returning from his farm on Abuja-Keffi road.

Badeh served as Nigeria’s chief of defence staff between January 2014 and July 2015 during the administration of former president, Goodluck Jonathan.

Among those who paid tribute to the late four-star general are Bukola Saraki, senate president; Yakubu Dogara, speaker of the house of representatives and Shehu Sani, lawmaker representing Kaduna central senatorial district.

Here are reactions to Badeh’s death.

Wait, so Alex Badeh, a former Chief of defense staff & 4-star General was brutally assasinated just like that in Abuja & unfortunately as is the case in Nigeria, his killers may never be found.

Security in Nigeria is so fragile that you really don’t know who is out to kill you.

Alex Badeh is a victim of "if we don't kill corruption, corruption will kill us."

May he reap what sow.

Nigeria has suffered another great loss with the passing of former Chief of Defence Staff, Air Chief Marshal Alex Badeh. My heartfelt prayers go to his family and our Armed Forces at this tragic time. May the Almighty grant him eternal rest. Amin. pic.twitter.com/Anc0rykZKw

How can Alex Badeh, a 4 star General be murdered easily just like that, This country is tiring !! May God grant all the people he left behind fortitude to bear this loss. pic.twitter.com/SeUYauORzr

The current state of insecurity in Nigeria evidenced by unaccounted killings leaves much to be desired.
The death of Ex-Chief of Defence Staff, Alex Badeh, reinstates the need for our security apparatus to align with current realities.
My thoughts and prayers are with his family pic.twitter.com/kxRJ2OTivI

News of the gruesome murder of the former Chief of Defence Staff, Air Chief Marshal Alex Badeh, is both saddening and alarming. My thoughts and prayers are with his family and loved ones, and I hope that those responsible are swiftly apprehended and brought to justice.

How does Alex Badeh, a 4-Star General get killed like that on his way from his farm as reported. A 2-Star General, General Alkali was also murdered on his way home this year. If this can happen to them, then who is safe in this country?

This Alex Badeh thing is shocking

As former CDS he is entitled to armed guards until he dies.

So how did this happen?

RIP and my condolences to his family

Wait, so Alex Badeh, a former Chief of defense staff & 4-star General was brutally assasinated just like that in Abuja & unfortunately as is the case in Nigeria, his killers may never be found.

Security in Nigeria is so fragile that you really don’t know who is out to kill you.

Shocked by the assassination of Alex Badeh but I don’t think I’d want to dwell on how such a thing could happen.

I mean this is a country where a sitting Minister of Justice was killed in cold blood a few days to Christmas and I’m not sure they’ve found out who did it till date.

Let me explain… if it were a military regime, Alex Badeh, a 4 star general, could be Head of State … so imagine one of the Living former Presidents shot dead on the street like a nobody… yeah, that’s how serious it is

The brutal murder of the former Chief of Defence Staff and former Chief of Air Staff, Air Vice Marshall Alex Badeh, is a despicable and cowardly act. Those that were behind it shall not escape justice and they will pay a terrible price for their wickedness. God will avenge!

RIP to Air Chief Marshal Alex Badeh. I worked closely with him, when I was part of the media consultancy team who set up 107.7 FM Armed forces radio, in Abuja in 2015. He was a warrior. Shook any room he stepped into!! He gave me the hardest handshake I have ever received. pic.twitter.com/iVFUQ7wdH0

Slept with the news of Alex Badeh's assassination, woke up to the news of massive fire outbreak in Abule Egba with mostly likely no timely assistance.

The only difference between Nigeria and war-torn countries is the lack of incessant bombings in all States of the federation.

General Alkali was killed and within hours a search was ordered and innocent people arrested and detained just about an hour ago the former Chief of Defence staff Alex Badeh was shot dead along Keffi- Abuja express I pray the investigation commence quick this is not ordinary.

Nigeria is not safe. A 4-Star General and former Chief of Defense Staff, Air Chief Marshal Alex Badeh has been murdered in cold blood. How does something like this even happen? Where was his security team?

If this is not a political assassination, then, it's an indictment on the government handling of affairs in this country which includes security, the more reason failure shouldn't be cuddled.

RIP ACM Alex Badeh.
A decorated officer killed like that. Something is fishy here.
May God grant the family the fortitude to cope with this unfortunate happening.

The murderer of former CDS Alex Badeh by unknown gunmen is a lesson to all in power. Many innocent life are been lost on a daily basis to the same gruesome act.
Work out our security for all Nigerians not privileged few we also have blood flowing like you does.
My Condolence!

The gruesome murder of Ex Chief of Defence Staff, Alex Badeh is one death too many. My thoughts are with the family and the people of Adamawa State.The Security Agencies must ensure the culprits are brought to book. Rest on, Defence Chief like no other.

TWITTER @thecableng
Copyright 2020 TheCable. All rights reserved. This material, and other digital content on this website, may not be reproduced, published, broadcast, rewritten or redistributed in whole or in part without prior express written permission from TheCable.
Tags
alex badeh
Advertisement