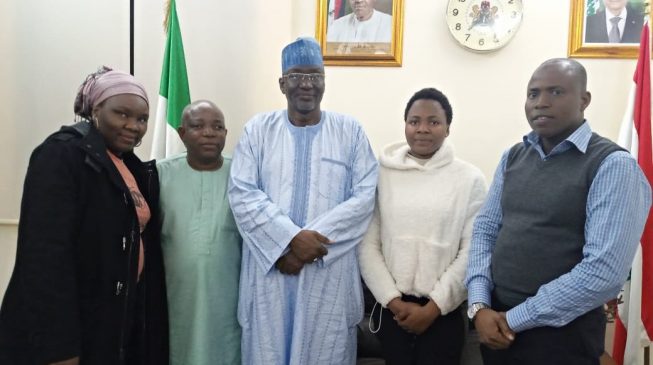 13:31 2020
Print This Article Share it With Friends
👤by Ebunoluwa Olafusi  0 Comments
Advertisement

This was disclosed by Abike Dabiri-Erewa, chairman of Nigerians in Diaspora Commission (NIDCOM), via Twitter, on Monday.

She said the lady, Omolola Ajayi, has been handed over to Goni Zanna Bura, the Nigerian ambassador in Beirut.

In a video online, the single mother, who is from Kwara state, had cried out for help.

She alleged that a friend of her family introduced her to a man who brought her to Lebanon with the promise that she would work as an English tutor in the country.

But on getting to the country, she discovered that she had been sold into slavery while her passport was confiscated.

She asked Nigerians to assist her to return home, saying she does not want to end up “dead like other victims”.

Dabiri-Erewa said Omolola’s traffickers had been arrested in Nigeria, including her boss in Lebanon.

She added that the boss will have to provide her ticket and her passport for her to return to Nigeria and that he would be reported to the ministry of foreign affairs in Lebanon and charged to court.

She said Omolola is expected to return next week.

Breaking news. Update on the viral video of trafficked Nigerian girl in Lebanon. She is now happily in the hands of the Nigerian Amb in Beirut , received warmly and happy to be in safe hands. She will be home soon by Gods grace .🙏🏿 https://t.co/xyK0myZ7gF

Speaking on Omolola’s plight, Abdulrahman Abdulrasaq, governor of Kwara state, condemned the rising trend of human trafficking in the country, describing it as “inhuman and unacceptable”.

The governor ordered an immediate investigation into the matter and said three suspects -two Nigerians and the Lebanese- had been arrested in connection with the case.

He said the suspects are being interrogated and asked citizens to report trafficking activities.

TWITTER @thecableng
Copyright 2020 TheCable. All rights reserved. This material, and other digital content on this website, may not be reproduced, published, broadcast, rewritten or redistributed in whole or in part without prior express written permission from TheCable.
Tags
Lebanontrafficking
Advertisement