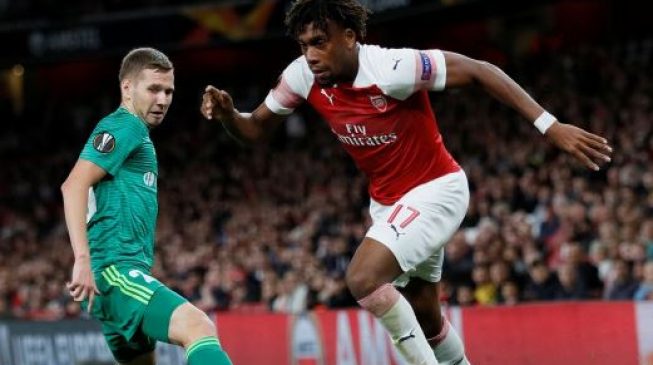 09:40 2018
Print This Article Share it With Friends
👤by Remi Sulola  0 Comments
Advertisement

Several Nigerian players were in action as the UEFA Europa League resumed Thursday. We begin with Arsenal’s 4-2 win over Vorskla at the Emirates Stadium.

Alex Iwobi provided an assist for the Gunners and was taken off in the 70th minute.

Victor Moses’ woes at Chelsea continued as he was benched for the entirety of the 1-0 win at PAOK Thessaloniki.

Chuba Akpom wasn’t listed by the Greek side.

It was all square between Villarreal and Rangers in a four-goal thriller.

Samuel Chukwueze was a 79th minute entrant for the Yellow Submarines. Lanky striker Sadiq Umar was benched for the entire match duration.

At the Estadio Sanchez Pizjuan, Standard Liege were at the receiving end of a 5-1 massacre from Sevilla. Utility player Uche Agbo was thrown into the fray with 17 minutes left on the clock.

Peter Olayinka did not feature for Slavia Prague in their 1-0 win against Bordeaux.

His Nigerian compatriot Samuel Kalu lasted the full throttle and was also booked.

Stephen Odey was in action at the NEO GSP Stadium. The Nigerian played for 75 minutes as 10-man FC Zurich won 1-0 at AEK Larnaca.

TWITTER @thecableng
Copyright 2020 TheCable. All rights reserved. This material, and other digital content on this website, may not be reproduced, published, broadcast, rewritten or redistributed in whole or in part without prior express written permission from TheCable.
Tags
Alex IwobiarsenalChelseaChuba AkpomEuropa LeagueSamuel ChukwuezeSportUche AgboVictor Moses
Advertisement