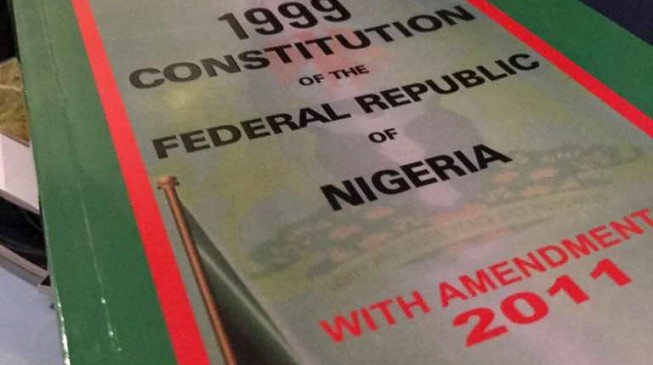 09:35 2019
Print This Article Share it With Friends
👤by Contributor  0 Comments
Advertisement

Two weeks ago, Nigeria’s President Muhammadu Buhari suspended the Chief Justice of Nigeria (CJN), Walter Onnoghen and swore-in Justice Tanko Muhammad as the Acting Chief Justice. President Buhari was purportedly acting on an ex part order from the Code of Conduct Tribunal in response to a petition to the Code of Conduct Bureau against the CJN alleging non-disclosure of assets. The President’s action is in clear violation of Nigeria’s Constitution and the move raises serious concerns about the rule of law in Nigeria and the integrity of the upcoming elections on February 16.

There are two ways that the CJN can be removed from office and none of the conditions were met which has triggered a constitutional crisis. The CJN can be removed from office under (a) Section 292 of the 1999 Constitution as amended and (b) the Third Schedule Part 1 to the Constitution. Under Section 292, the President can address the Senate stating that the CJN is unable to carry out the functions of the office either due to health reasons or misconduct and the Senate by a two-thirds majority can remove the CJN. Under the Third Schedule to the Constitution Part 1, the President can remove the CJN on the recommendation of the National Judicial Council (NJC). The Constitution clearly does not give the President the powers to remove nor suspend the CJN.

The CJN has admitted to omissions on his asset declaration form, but his refusal to step aside and trying to prevent an investigation has become the secondary issue against Mr President’s breach of the Constitution. Condemnation of Mr President’s action has been swift from internal and external stakeholders. Key media platforms in Nigeria like Premium Times and Daily Trust have characterized the President’s action as dictatorial and anti-democratic. The international community, particularly the United States, United Kingdom and the European Union, have issued strong statements expressing their concerns about the timing of this action and the grave potentials it has for credible elections.

The Nigerian judiciary is grossly compromised with the President of the umbrella body of lawyers – Nigerian Bar Association (NBA) being investigated for fraud. The head of the Code of Conduct Tribunal who signed the ex parte order the President implemented is also being investigated for fraud. As such, when the NBA rose from its emergency Executive Committee Meeting on Monday, January 28th and asked members of the bar to boycott the courts for 2 days, some lawyers responded that obligations to clients were more important than defending a broken system. The Senate has filed a case at the Supreme Court for an interpretation of the relevant clauses of the Constitution vis-a-vis the President’s actions, which violates due process as a motion was not raised on the floor of the Assembly to that effect. The NJC on Tuesday, January 29th gave both the suspended CJN and the Acting CJN seven days to respond to the petitions against them.

The courts in Nigeria with all its imperfections have played a stabilizing role in matters of electoral conflict. Beyond the broader roles of the judiciary, under Nigeria’s law, the Supreme Court has original jurisdiction and the final say in matters related to election petitions in a Presidential Election. Many analysts, including the authors of this piece, see the move by the President as a calculated attempt to gain some electoral advantage should an election petition between the President and the main opposition end up in the Supreme Court.

The context  of the President’s action is that his verbal commitment to the rule of law and the government’s actions have been contradictory throughout this administration. There are several high-profile cases where the government has disobeyed court orders, therefore, the efficiency with which this order, which was illegal in form and substance, was implemented raises serious concerns about the government’s intent. If the President’s action is not reversed, it will reinforce the notion that this administration really has no interest in upholding the rule of law when the Vice President is a senior lawyer as are two other ministers. It will also give a sense that there are no rules and the brute force of the state can be deployed on the whims of the President with no consequences.

Nigeria’s Feb 16th Presidential election is keenly contested and the President’s action is seen as a desperate attempt to rig the elections in his favour. Furthermore, the response of the government to concerns being raised by the international community, members of the bar and CSOs has been quite disturbing. Unfortunately, for a significant percentage of Nigerians, the suspension of the CJN is seen as a decisive fight against corruption because the judiciary should be above board. Manipulating emotions to undermine institutions is a dangerous trend and in this case, the voice of the people is not the voice of God.

Ilo is the Nigeria country representative for the Open Society Initiative for West Africa (OSIWA). Adamolekun is the executive director for Enough is Enough Nigeria (EiE).

TWITTER @thecableng
Copyright 2020 TheCable. All rights reserved. This material, and other digital content on this website, may not be reproduced, published, broadcast, rewritten or redistributed in whole or in part without prior express written permission from TheCable.
Tags
Chief Justice of Nigeria (CJN)constitutional crisisJustice Tanko MuhammadMuhammadu BuhariUDO JUDE ILOWalter OnnoghenYemi Adamolekun
Advertisement