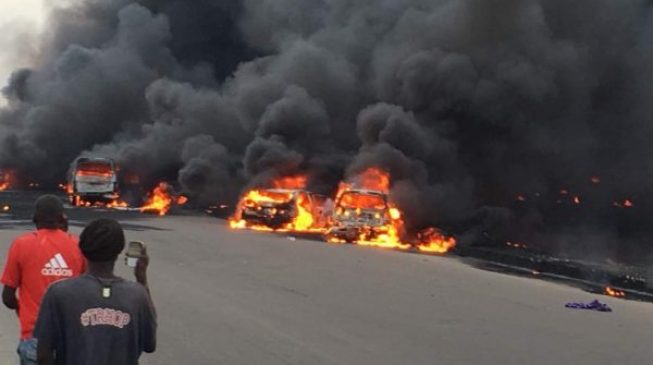 21:11 2018
Print This Article Share it With Friends
👤by News Agency  0 Comments
Advertisement

Nine persons lost their lives in the petrol tanker fire around Otedola bridge on the Lagos-Ibadan expressway on Thursday.

The Federal Road Safety Corps (FRSC) gave this update, saying the victims were burnt beyond recognition.

According to the FRSC, 54 vehicles also got burnt. The accident, outward Lagos, happened around 5.30pm.

According to Bisi Kazeem, spokesman of the FRSC, the cause of accident was break failure suffered by the petrol laden tanker.

LASEMA later tweeted that the fire outbreak had been contained.

LRU Fire & Rescue has completely put out the fire. We would share more details with you shortly. #Call112 #LagosCares

We have managed to suppress the fire which started approximately 6pm when a fuel tanker caught flame at Otedola Bridge, Ikeja and secure the scene; the first fire truck was on scene within 7 minutes but unfortunately over 30 vehicles were already incinerated..1/

The Lagos state government has commiserated with families of victims of the explosion.

In a statement, Kehinde Bamigbetan, commissioner for information, described the incident as a sad development, saying it is “most unfortunate and regrettable”.

“On behalf of the Lagos state government, we extend our deepest commiseration to the families of persons who lost their lives as well as properties to the incident. Our thoughts and prayers are with them in this time of pain and grief,” the statement read.

“As a government, we would not relent in putting measures in place to ensure safety of lives and property of all residents.”

He called for the co-operation of all citizens with the officials of the agencies to restore the situation to normalcy.

He also urged motorists to continue to adhere to the safety standard and the state traffic laws so as to prevent a re-occurrence of such incidents.