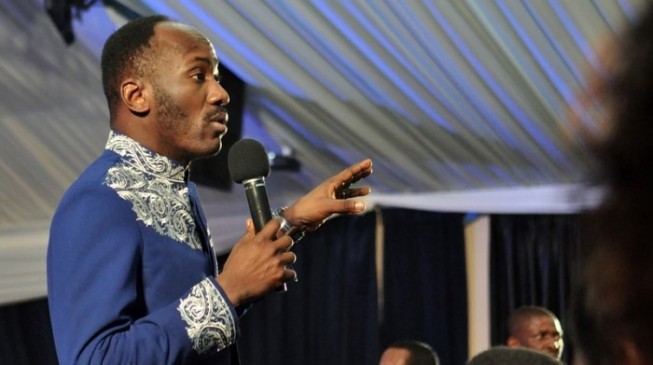 18:12 2017
Print This Article Share it With Friends
👤by Taiwo George  0 Comments
Advertisement

Johnson Suleman, general overseer of Omega Fire Ministries Worldwide, has challenged the Department of State Service (DSS) to go after herdsmen who have “already killed over 7000 persons” in the country.

But for the intervention of Ayodele Fayose, governor of Ekiti state, Suleman would have been arrested in the wee hours of Wednesday.

Operatives of the secret police had stormed the hotel where the fiery preacher who was in Ekiti for a 2-day crusade lodged, with the intention of arresting him.

The action of the DSS comes days after Suleman told his security aides to kill any herdsman found around his church premises.

But reacting to the attempt to arrest him, the fiery cleric said “such a draconian action by a change government is harsh, dangerous and negates the tenets of democracy”.

Suleman said he maintained the right to ask his aides to kill those who allegedly plotted to terminate his life.

He wondered why he could be so harassed for “merely expressing his opinion” on the menace of Fulani herdsmen, when freedom of expression is one of the rights guaranteed by the nation’s constitution.

“The Fulani militia masquerading as herdsmen have stated that they are going to kill me. Everyone knows that they are armed with AK47 and have already killed over 7000 persons in Nigeria,” read a statement issued on his behalf by Phrank Shaibu, his communications adviser.

“Women have been raped and houses destroyed. Yet, not one of them has been caught or is being prosecuted by the DSS or federal government.

“Are we saying that I should fold my arms and allow the same Fulani militia to kill me? Am I wrong to give my security aides orders that they should kill any of the so-called herdsmen found near me or my church? Is there nothing like self-defence in our law.”

Suleman said even if his comments were found to be inciting, he should have been invited for explanation, “rather than attempting to kidnap” him.

“We expected a more civilized conduct from a government that promised change,” he said

“What most people do not know is that Apostle Suleiman’s father was a Muslim. He was born into a Muslim family. He has brothers and sisters that are Muslims and enjoy very cordial relationship with them. So to brand him anti-Islam or anti-Muslim is being mischievous or taking apostle’s message out of context.”

The pastor advised the government to tackle the challenges confronting Nigerians rather than harassing citizens.

He also demanded an apology from the government over the attempt to arrest him.

“It is sad that a government that promised a new dawn for Nigerians on 29 May, 2015 under a president who pledged to ‘allow all arms of government (including free press) to function optimally and avoid the confusion which all too often bedevils governance’, has now resorted to a tactic that was so cruelly employed by the military in the country’s not-too-distant past. Is this the change that President Muhammadu Buhari promised Nigerians?'” he asked.

”The Muhammadu Buhari administration’s hounding of Apostle Johnson Suleman, instead of tackling headlong the many problems that are making life unbearable for Nigerians, brings to mind the adage that a man who carries an elephant on his head should not be searching for a cricket.

“There is no way the Buhari administration will escape the kind of issues that Apostle Suleman has raised if it does not stop the senseless killing of innocent Nigerians by Fulani herdsmen.”

TWITTER @thecableng
Copyright 2020 TheCable. All rights reserved. This material, and other digital content on this website, may not be reproduced, published, broadcast, rewritten or redistributed in whole or in part without prior express written permission from TheCable.
Tags
fulaniJohnson Suleman
Advertisement