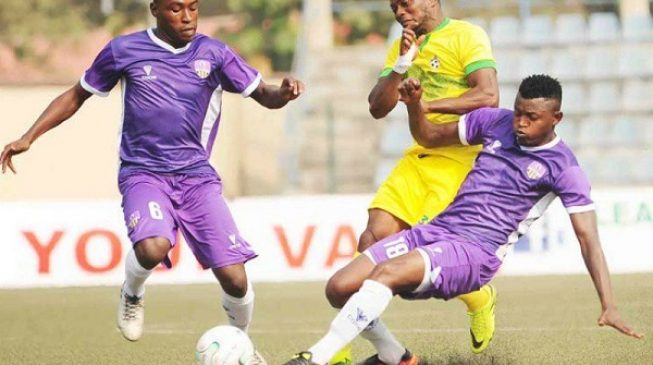 09:14 2018
Print This Article Share it With Friends
👤by Remi Sulola  0 Comments
Advertisement

Games in week 21 of the Nigeria Professional Football League (NPFL) gave fans a lot to cheer.

The biggest winners were Abia Warriors who secured their first away victory of the season against MFM FC at the Agege Stadium on Sunday.

TheCable has a low down on how action panned out in nine centres.

A second half Ndifreke Effiong goal gave Abia Warriors an away win over MFM FC.

Kano Pillars made an emphatic statement about their NPFL title ambition as they outwitted Katsina United 3-1 in the northern derby.

Junior Lokosa’s brace and Nyima Nwangua gave Pillars a 3-0 lead before Destiny Ashadi pulled one back for the Changi Boys.

Reuben Bala produced the winner for the Plateau side.

Enugu Rangers and Akwa United were unable to create any spark, producing a dour 0-0 draw at the Nnamdi Azikiwe Stadium.

Kwara United missed the chance to ease their relegation fears as they were held to a 1-1 draw by Niger Tornadoes. Segun Alebiosu’s goal was cancelled out by Ahmadu Liman.

Shedrack Oghali made the difference as Go Round pipped Wikki Tourists 1-0 in Omoku.

El-Kanemi Warriors settled for a 1-1 draw against Rivers United.

The Pride of Rivers’ goal came in the 45th minute courtesy of Aghahowa Otakho’s own goal. Michael Ohanu equalised in injury time from the penalty spot.

Sunshine Stars gaffer, Henry Abiodun, got the monkey off his back as his side registered a 2-1 win over Heartland.

Despite being an entertaining encounter, both sides settled for a point each with Seka Pascal and Chidiebere Ajoku getting on the scoresheet.

TWITTER @thecableng
Copyright 2020 TheCable. All rights reserved. This material, and other digital content on this website, may not be reproduced, published, broadcast, rewritten or redistributed in whole or in part without prior express written permission from TheCable.
Tags
El KanemiGo RoundKano PillarsKwara UnitedLMCMFM FCNPFLSportSunshine StarsWikki TouristsYobe Desert
Advertisement