Obama to Buhari: You’re facing difficulties but we believe in you 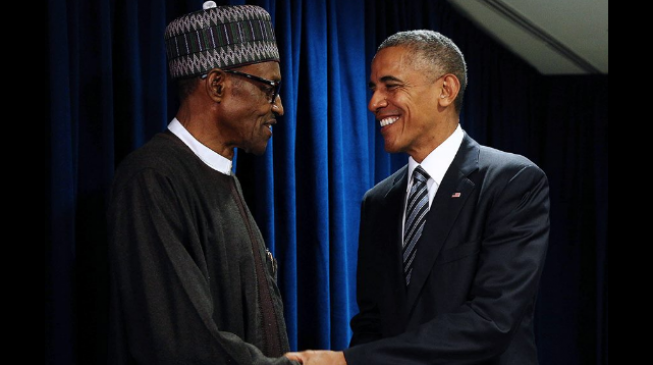 22:29 2016
Print This Article Share it With Friends
👤by Taiwo George  3 Comments
Advertisement

President Barack Obama of the United States says his government has confidence in the administration of President Muhammadu Buhari.

According to Femi Adesina, special adviser to the president on media and publicity, the US leader said this during a bilateral meeting on the sidelines of the 71st edition of the UN General Assembly.

Obama reportedly described Buhari as a man of “integrity and honesty,” and said his administration would assist Nigeria within the short period it has left.

The 44th president of the US will be bowing out of office in January after serving two terms.

“We have confidence in your leadership. There are some difficulties you face, but this administration is willing to assist in the short time we have left,” Adesina quoted Obama as saying.

“You have made real progress in defeating the brutal organisation called Boko Haram, and that was achieved because of your leadership.”

Obama also reportedly offered a hand of fellowship to Nigeria “in the final and comprehensive defeat of Boko Haram, resolution of the Niger Delta crisis, which would help ramp up oil production and increase revenue, resolving the humanitarian crisis in the North East, recovering stolen money, and revamping the economy”.

He described Nigeria as a big and important country in sub-Saharan Africa, and said his country looked forward to a framework for sustained partnership between the two nations.

Earlier, Buhari assured Obama of the progress of his administration, and the efforts being taken towards resolving the economic crisis.

He also expressed optimism that the problem of militancy in the Niger Delta region would soon be resolved.

“We are making definite progress on how many factions of the militant groups exist, their leadership and operational basis, and we have equally sought the cooperation of the oil majors,” Buhari said.

“In a short while, I believe the issues would be resolved.”

He thanked America for helping in the area of security by providing armaments, training for Nigerian troops, and sharing of intelligence, which has been crucial to the degradation of Boko Haram.

Buhari added that Nigeria was open to support in combating the humanitarian crisis currently ravaging the north-east region.

He reiterated that his administration came to power on the tripod promises of security, battle against corruption, and revamping of the economy, and emphasised that there would be no let-up in fulfilling those electoral promises.

TWITTER @thecableng
Copyright 2020 TheCable. All rights reserved. This material, and other digital content on this website, may not be reproduced, published, broadcast, rewritten or redistributed in whole or in part without prior express written permission from TheCable.
Tags
Barrack Obamafemi adesinaMuhammadu Buhari
Advertisement