Odinkalu asks: Are we so useless that our president cannot address us? 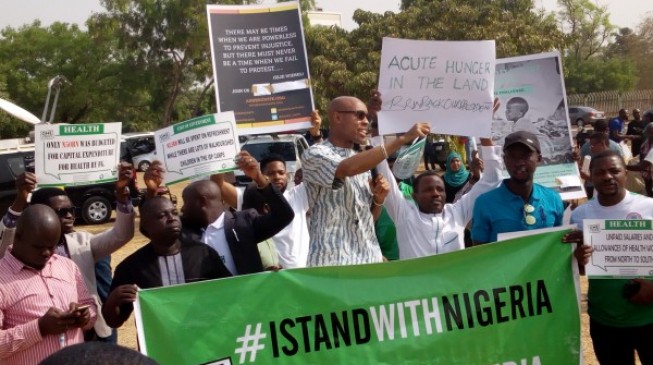 14:45 2017
Print This Article Share it With Friends
👤by Dyepkazah Shibayan  3 Comments
Advertisement

Chidi Odinkalu, a lawyer and human rights activists, says President Muhammadu Buhari has not done enough in terms of communicating with Nigerians.

Speaking when he led protesters to the presidential villa in Abuja on Monday, Odinkalu said: “When he wants to talk about Nigeria, he gets on a plane and goes outside Nigeria and he starts gossiping about us.”

Odinkalu rated the current administration low, saying the All Progressives Congress (APC) government has not been able to fulfill its electoral promises.

“We thumbed Buhari into office in 2015, then he got into power and what happened?” he asked.

“Are we so useless that our president cannot invite us and tell us, ‘look, we need your help to get this’? We don’t get compassion, we don’t get empathy, we don’t get thoughtfulness, and there is no plan, and then we are told we cannot protest too? What kind of country is that? What kind of citizens are we?”

“Last week, fake pictures of the president meeting people in London emerged. Last night, Femi Adesina said people can get sick; people can even die, and Shehu Garba said he spoke with the president’s doctor and was told he is well. Now think about it, if the president is well, who is Shehu to speak to his doctor?

“If the president is not ill, why should people be circulating fake pictures?”

He told the protesters that they did not need to obtain a “license” from the police before expressing their rights.

Odinkalu also taunted the pro-government group, which held a simultaneous rally, saying if they had food on their table, they would not be hired for a counter protest.

“Nothing is bigger than trying to rescue our country. We are trying to make sure that Nigeria works for everybody. We came here as poor ordinary Nigerians armed with our national plan,” he said.

“President Muhammadu Buhari’s government is one that intimidates people. It is a government that just intimidated 2face. I told the security agencies that were here, we saw this under Jonathan, now we are seeing worse.

“Look at the crowd they are renting across there. Does this show a government that thinks, the things people complain under Jonathan is the same thing happening now, even worse.

“Under Jonathan many people were stealing, now under this government a few people are stealing. One person took money for IDP and government has cleared the person. It’s a shame, is it not a shame?”

TWITTER @thecableng
Copyright 2020 TheCable. All rights reserved. This material, and other digital content on this website, may not be reproduced, published, broadcast, rewritten or redistributed in whole or in part without prior express written permission from TheCable.
Tags
abujaChidi Odinkaluprotests
Advertisement