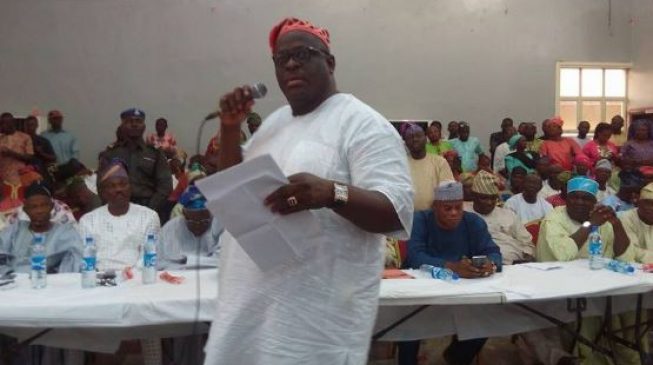 10:32 2018
Print This Article Share it With Friends
👤by Ebunoluwa Olafusi  0 Comments
Advertisement

The supreme court has declined to issue a stay of execution on the ruling which recognised the Adebayo Dayo-led executive committee as the authentic leadership of the Peoples Democratic Party (PDP) in Ogun.

The ruling was delivered on Wednesday. The court struck out the request, saying the parties involved should wait for a definite order by the appeal court.

A five-man panel of judges, led by Olabode Rhodes-Vivour, also struck out another application filed by the national leadership of the PDP for accelerated hearing of the appeal after it was voluntarily withdrawn by the national working committee of the party.

Emeka Etiaba, the senior advocate of Nigeria (SAN) representing PDP, had withdrawn the application because the respondents were yet to file their brief responding to the main appeal.

The Dayo-led faction is backed by Buruji Kashamu, who is the governorship candidate of the party recognised by the Independent National Electoral Commission (INEC).

During the proceeding, Alex Izinyon (SAN), the respondents’ lawyer, argued that his clients had eight weeks to respond to the appeal.

He noted that the application was therefore “incompetent”.

The court agreed with Izinyon but asked the appellant to file an application for abridgment of time for the respondent to file their brief.

The PDP is challenging the court judgment which ordered the party’s national leadership and INEC to recognise the Dayo-led executive committee till the expiration of tenure in 2020.

TWITTER @thecableng
Copyright 2020 TheCable. All rights reserved. This material, and other digital content on this website, may not be reproduced, published, broadcast, rewritten or redistributed in whole or in part without prior express written permission from TheCable.
Tags
Adebayo Dayo-led committeeOgun statedPDPPDP leadershipSupreme court
Advertisement