‘One tragedy too many’ — Sanwo-Olu speaks on collapsed building 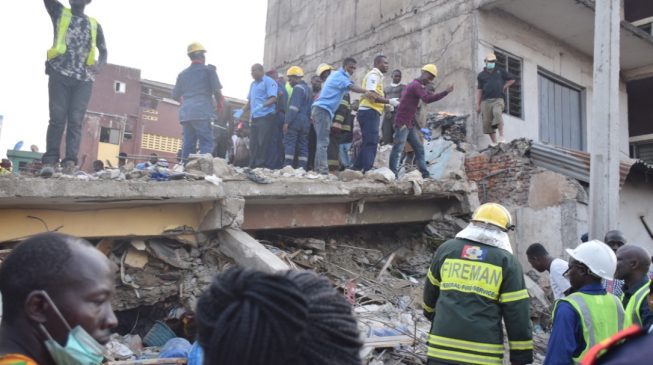 10:33 2019
Print This Article Share it With Friends
👤by Ebunoluwa Olafusi  0 Comments
Advertisement

Babajide Sanwo-Olu, Lagos state governor-elect, has commiserated with the families of those who lost their lives in the three-storey building that collapsed at Ìta-Fàájì, Lagos Island.

The building, which housed a primary school on its second floor, caved in on Wednesday morning while pupils were in their classrooms.

At least 12 people, including nine children, have been confirmed dead.

In a statement, Sanwo-Olu described the incident as “one tragedy too many”. He hailed the state government for responding swiftly to the incident by deploying the emergency agency for rescue operation.

He also urged residents to support the government in reducing the fatalities and trauma of the incident.

“My deep condolences go to the families of the children who lost their lives in the unfortunate building collapse that happened at Ita Faji in Lagos Island,” he said.

“This is one tragedy too many, given that most of the victims are school children. I urge people to cooperate with officials working on rescue efforts.

“My prayers are with the affected families and the school management. While emergency workers are making frantic efforts to clear the rubble and rescue more victims, I urge residents to join hands with the government in any way possible to reduce fatalities and lessen attendant trauma of the incident.

“I am in support of the action being taken by the government and I urge every resident to show spirit of compassion inherent in our community.”

TWITTER @thecableng
Copyright 2020 TheCable. All rights reserved. This material, and other digital content on this website, may not be reproduced, published, broadcast, rewritten or redistributed in whole or in part without prior express written permission from TheCable.
Tags
Babjide Sanwo-Olucollapsed buildinglagos islandprimary schoolthree-storey
Advertisement