Osinbajo: Buhari has ensured nobody steals money from treasury 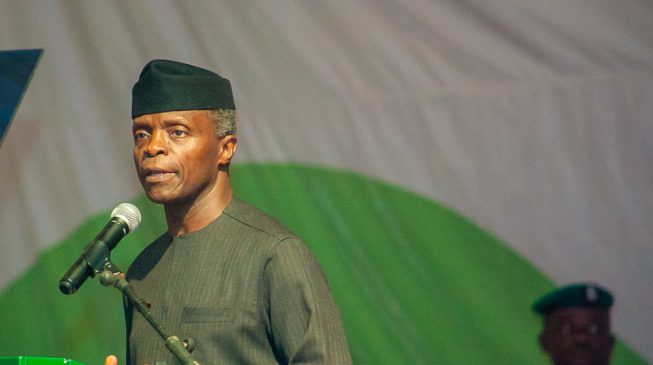 14:09 2018
Print This Article Share it With Friends
👤by Taiwo Adebulu  0 Comments
Advertisement

Vice-President Yemi Osinbajo says President Muhammadu Buhari has ensured that nobody steals from the nation’s treasury.

In a statement on Monday by Laolu Akande, senior special assistant to the vice-president on media and publicity, Osinbajo said the country’s major problem before the current administration came in was that people were stealing from the treasury.

The vice-president said once the country is able to stop corruption, it would be better.

He said the focus of the Buhari administration is to make things better for the common man, adding that himself and the president cannot deceive Nigerians in any way.

“The focus of our government is on how things can be better for the common man. We are not in the business of trying to deceive Nigerians. You can accuse me and the President of anything, but you will never find us deceiving Nigerians,” the statement read.

“The President has ensured that nobody steals money from the treasury. The major problem Nigeria had before now was the fact that people stole from the nation’s coffers. Once the country is able to stop corruption, it would be better.

“The first thing we did was tackle unemployment by employing young men and women through the N-Power job scheme, which has so far employed 500,000 young graduates.

“Every state has N-Power, noting that there are plans to employ more because of the number of graduates. This is a social safety net for young unemployed Nigerian graduates.

“So far, we have given about 400,000 MarketMoni loans, but the target is to give 1 million loans to artisans and traders, while TraderMoni loans are N10,000 interest-free loans to petty traders, of which 2 million are expected to be reached in the first phase.”

Osinbajo said the federal government has also introduced the energizing economies initiative, which has provided clean, affordable and constant electricity to economic bases like big markets and micro, small, and medium enterprises (MSMEs) across Nigeria.

TWITTER @thecableng
Copyright 2020 TheCable. All rights reserved. This material, and other digital content on this website, may not be reproduced, published, broadcast, rewritten or redistributed in whole or in part without prior express written permission from TheCable.
Tags
Laolu AkandeMuhammadu BuhariYemi Osinbajo.
Advertisement