Osinbajo: Why I chose not to attend Wole Soyinka awards 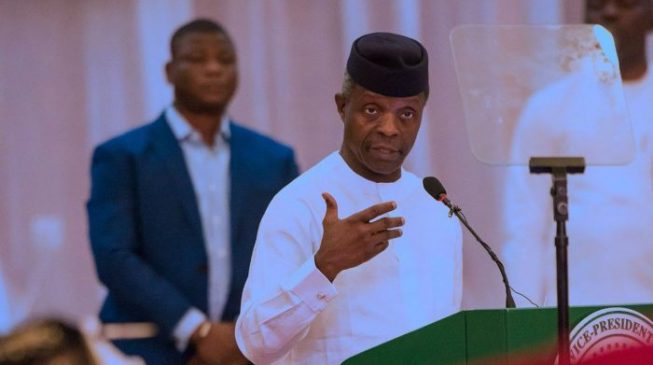 19:35 2019
Print This Article Share it With Friends
👤by Chinedu Asadu  0 Comments
Advertisement

Vice-President Yemi Osinbajo has released a copy of the letter he wrote to Wole Soyinka Centre for Investigative Journalism (WSCIJ) excusing himself from the ceremony where he was to receive an “integrity award”.

In the letter released by Laolu Akande, Osinbajo’s spokesman, the vice-president said it would be insensitive for him to attend the award ceremony in the light of the travails of Omoyele Sowore, convener of RevolutionNow movement.

Osinbajo released the letter on Monday, hours after the centre announced it was postponing the award of Osinbajo over Sowore’s treatment.

It had said the postponement was “to align with protests against the repression of freedom of speech in recent times especially the incident between the Department of State Security (DSS) and Omoleye Sowore.”

But in the letter shared with TheCable, Osinbajo explained the reason why he would be absent at the event.

The letter read:”I am extremely grateful for the recognition and award of the “Integrity Specialty of the Wole Soyinka Centre for Investigative Journalism’s Anti-corruption Defender Award of 2019” to me.

“The award, I note, is for our Justice reform efforts in Lagos State. I had accepted the award with pride on behalf of the excellent Justice Sector team we had.

“However, two reasons explain my absence. First is that I am currently in Abu Dhabi for an international meeting under the auspices of the government of the UAE where I am the keynote speaker.

“Second, in view of the development on Friday in the Sowore case, I think it would be insensitive and inappropriate to attend the ceremony.

“Please accept my heartfelt apologies and extend the same to the other members of the organizing team. God bless you.”

TWITTER @thecableng
Copyright 2019 TheCable. All rights reserved. This material, and other digital content on this website, may not be reproduced, published, broadcast, rewritten or redistributed in whole or in part without prior express written permission from TheCable.
Tags
Vice President Yemi OsinbajoWole Soyinka Centre for Investigative Journalism
Advertisement

10 ways to get rid of cockroaches using home remedies