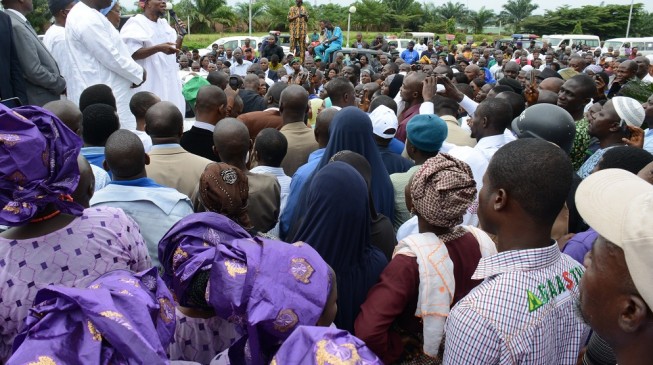 19:03 2015
Print This Article Share it With Friends
👤by Taiwo George  0 Comments
Advertisement

Adekomi Jacob, chairman of the Nigerian Labour Congress (NLC) in Osun, says workers in the state would begin an indefinite strike on Tuesday.

He said this was meant to press home demands for their salaries and entitlements that have not been paid in the last six months.

Addressing a press briefing in Osogbo, capital of the state on Monday, Jacob lamented the workers and their dependants have been forced to undergo hardship.

“The strike will commence from May 26 until when the demands of the unions and workers are met,” he said.

“The indefinite strike action will be total and by this billeting, workers are advised to stay at home while pressing home our demands. That no worker should resume work until announcement is made by the labour bodies to that effect.”

He accused the state government of treating welfare of the workers with levity.

“Despite the 14 days ultimatum given by the union to allow the state government to take drastic action to the effect, no payment was effected,” he said.

17 unions are in support of the move by the NLC.

Rauf Aregbesola, governor of the state, has been blaming the inability to pay salaries on declining federal allocation as a result of crash in oil price.

He has been appealing to the workers to exercise patience.

“I was meeting my wage bill of over N3.6 billion with N4.6 billion federal allocation until July, 2013 when the federal government announced a decline of about 40 per cent allocation to states,” he said in March during a colloquium organised in honour of Bola Tinubu, national leader of the All Progressives Congress (APC), who clocked 63 then.

“This reduced the state’s allocation from N4.6 billion with which I was meeting my bills to N2.6 billion.

“Since then, Osun has had to augment salaries by sometimes N1 billion, sometimes N1.6 billion.

“Before the last time I paid salaries in November, 2014, I have had to either spent the state’s reserves on salaries or borrow money.

“Today, I have a loan of N12 billion that we spent on salaries and I could not go to the banks anymore.”

“Federal allocation to the state has reduced by 40 per cent since 2013, making it difficult for government to meet up its responsibilities.”

Figures released by the ministry of finance on Sunday indicated that Osun got N61.4 billion from the excess crude account (ECA) between 2011 and 2015.

TWITTER @thecableng
Copyright 2020 TheCable. All rights reserved. This material, and other digital content on this website, may not be reproduced, published, broadcast, rewritten or redistributed in whole or in part without prior express written permission from TheCable.
Tags
Adekomi JacobNLCOsunrauf aregbesola
Advertisement

Akpabio: Don’t blame me for irregularities in rerun in Akwa Ibom… I’ve no interest in it

Kwara, Saraki to settle dispute over ‘Ile-Arugbo’ out of court