‘Over 100’ shot dead in Plateau, curfew imposed on three LGAs 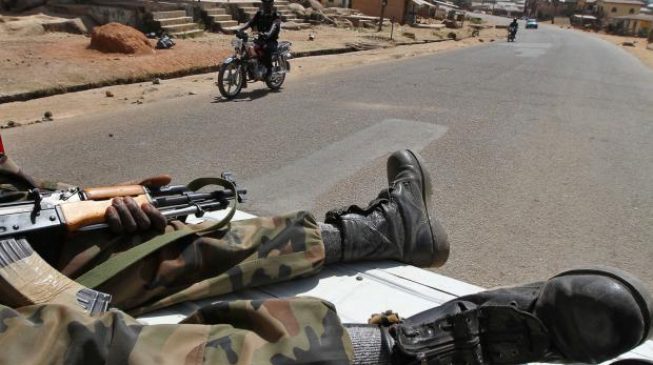 16:26 2018
Print This Article Share it With Friends
👤by TheCable  0 Comments
Advertisement

The Plateau state government has imposed a curfew on Riyom, Barakin Ladi and Jos south local government areas of the state, following the deaths of “over 100” persons on Saturday night.

Rufus Bature, secretary to the state government, announced the curfew on Sunday afternoon.

He said the movements in the three local government areas would be restricted between 6pm and 6am.

Bature added that those on “essential duties” would be exempted.

Ladi Choji, chairman of Berom Youth Movement, told reporters over 100 persons were killed while houses, including churches, were torched.

He said 31 corpses were recovered from Gashish village, 42 others from different villages in Barkin Ladi.

The attacks were blamed on suspected herdsmen.

“I believe that this attack was carefully planned by the herdsmen in collaboration with some military personnel who aided the attack,” he said.

“We have recovered 34 corpses from Gana Ropp and 8 from Gashis while several others have not been recovered.

“The corpses would be close to 100 because apart from 42 corpses that we have recovered, we are mobilising people to go into the villages to pick other corpses corpses that have not been recovered.”

Mathias Tyopev, spokesman of the Plateau police command, confirmed the incident but could not give casualty figure.

In his reaction, Yakubu Dati, commissioner of information, said government had mobilised the “full compliments” of security forces to restore normalcy in the affected areas.

“Government is deeply pained that despite concerted efforts which had led to the restoration of relative peace across the state, some unpatriotic elements are bent on disrupting the gains so far made,” he said in a statement.

Describing the attacks as a genocide the state chapter of the Peoples Democratic Party (PDP) called on the international community to come to the aid of the state.

“We received with rude shock the level of genocide going on now in Gashish District, Razat, Ruku Nyarr and Gana-Ropp, all in Barkin Ladi local government,” John Akans, the party’s publicity secretary, said in a statement.

“We also note with great pains the dastardly attacks ongoing in many other local government areas in the state by the Fulani militias. We condemn in the strongest terms the level of continuous genocide of Plateau people. At the moment, Barkin Ladi is under siege with over 130 people feared to have been killed. As at time of this statement, the (SOM) CAPRO School of missions Gana-Ropp is under heavy attack by the militias.

“This unholy act of systematic genocide and the destruction of the cultural heritage of Plateau people must stop. We call on the international community to come to the aid of Plateau people as besides the over 130 people killed many are missing.”