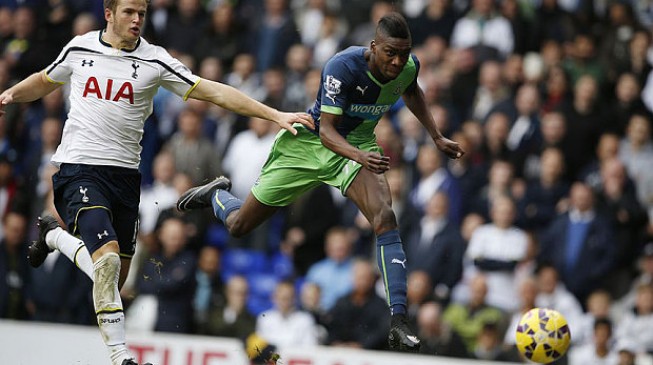 19:47 2014
Print This Article Share it With Friends
👤by Victor Akhidenor  0 Comments
Advertisement

After many years on the fringes, Ameobi is currently playing at his best for the Magpies and he showed his talent in their last BPL game against Tottenham, where he came off the bench to score a goal in the 2-1 win.

Owen, who also played for the Toon Army between 2005 and 2009, said with self-belief and support from the fans, the 22-year-old could go on and emulate some of the greatest talent of the English game.

“I have watched Sammy quite a bit over the years and there were times I’ve thought ‘wow’ after he’s done something that few other players can,” Owen told Chroniclelive.co.uk.

‪“He can run with the ball at his feet as fast as without; he has skills good for a goal as he showed on Sunday. There is something there.

“Right now, he’s a tidy player; however, Sammy has it in him to go onto the next level. Who knows what will happen but he’s a real talent.

‪“What he needs is belief in himself, maybe for the fans to sing about him. It’s amazing what that can do for your confidence and what confidence can do for any player.”

Owen scored 26 goals in 71 games for Newcastle and in some of those matches was Sammy’s brother Shola’s strike partner.

“I’m told Sammy is a good guy and Shola was a lovely bloke as well. He’s got more in his locker than Shola,” he said.

“Sammy is definitely classy. As I said, he does produce moments that not many others can.”

TWITTER @thecableng
Copyright 2020 TheCable. All rights reserved. This material, and other digital content on this website, may not be reproduced, published, broadcast, rewritten or redistributed in whole or in part without prior express written permission from TheCable.
Tags
Barclays Premier LeagueMichael OwenNewcastle UnitedSammy AmeobiToon Army
Advertisement