Pardew: Ameobi running out of chances to prove worth 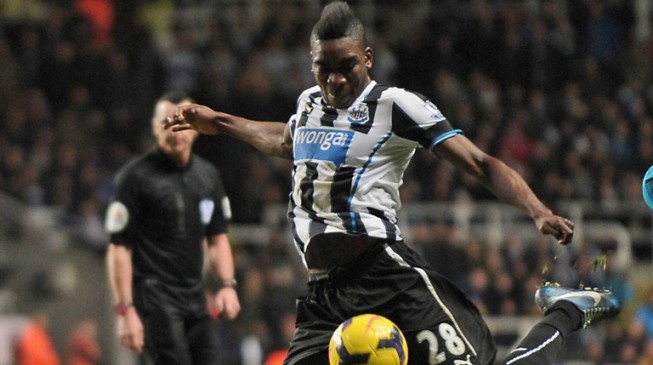 21:00 2014
Print This Article Share it With Friends
👤by Victor Akhidenor  0 Comments
Advertisement

Newcastle United manager Alan Pardew has warned striker Sammy Ameobi that time is running out for him to prove himself at the Toon.

Sammy, younger brother of Shola and affectionately referred to by many fans as “Sameobi”, recently pledged his international future to Nigeria but Pardew is more concerned about his Newcastle future, which might be up if his form does not improve.

Shola Amoebi left the club for Turkish side Gaziantep Buyuksehir and Sammy could also face the exit door if his boss remains unimpressed with his performance.

“Sammy is a player who has unbelievable talent and we have been waiting and waiting for him to deliver something,” Pardew told the Mail.

The 22-year-old has struggled to impress after breaking in the first-team squad three years ago, but he has not been able to build on that and has fallen down the pecking order among the strikers at St James’ Park, especially after the arrival of French striker Emmanuel Riviere.

He impressed, though, when he came on as the Magpies fought back to draw 2-2 with Hull City.

“He comes on and changes the game a little bit. He runs up the pitch, takes players on and that is what we want,”Pardew said.

“And then he concedes a free-kick, and we could lose the game. These are the things you have to learn even in the pressure situation.”

Last season, the striker played 12 matches in all competitions for Newcastle United scoring a single goal.

TWITTER @thecableng
Copyright 2020 TheCable. All rights reserved. This material, and other digital content on this website, may not be reproduced, published, broadcast, rewritten or redistributed in whole or in part without prior express written permission from TheCable.
Tags
Alan PardewEmmanuel RiviereGaziantep BuyuksehirNewcastle UnitedSammy AmeobiShola Ameobi
Advertisement

Buhari, redeploy corps members from the northeast and close University of Maiduguri for now!