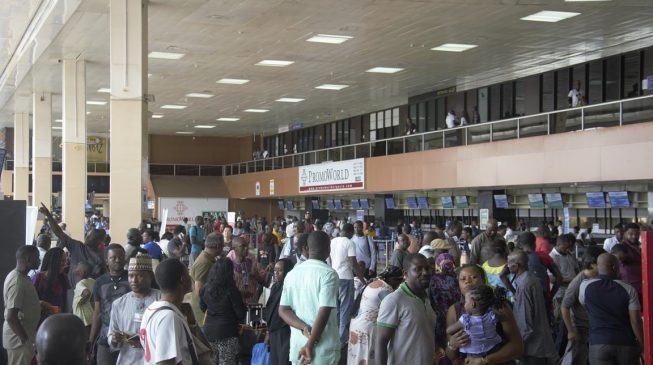 14:53 2019
Print This Article Share it With Friends
👤by Taiwo Adebulu  0 Comments
Advertisement

Joseph Alabi, spokesperson for the MMIA police command, said the incident happened on Saturday when the deceased was waiting to board an Air France flight out of the country.

Alabi said the passenger was said to have slumped suddenly after receiving news that his wife had died.

According to him, Oladapo was confirmed dead by Ajayi Olamide, a medical doctor at the MMIA medical clinic.

Alabi said the corpse had been deposited at the Air Force hospital mortuary.

The police airport command spokesperson also dismissed claims that a Royal Air Maroc aircraft, with registration number CN-ROR, was burgled while landing at MMIA on Friday.

He said the police had carried out investigation and confirmed that all necessary security landing procedures were observed.

“There is a standard procedure, which includes an escort vehicle following an aircraft that is landing, which will make it difficult for any invader to approach the aircraft,” he said.

“The aviation security officials confirmed that they arrived at the aircraft with its baggage cabin door already opened which might have been due to other factors.”

TWITTER @thecableng
Copyright 2020 TheCable. All rights reserved. This material, and other digital content on this website, may not be reproduced, published, broadcast, rewritten or redistributed in whole or in part without prior express written permission from TheCable.
Tags
AirportJoseph AlabilagosPolice
Advertisement