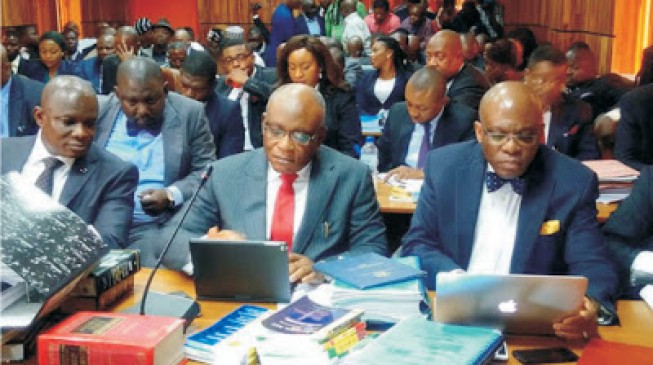 17:44 2018
Print This Article Share it With Friends
👤by News Agency  0 Comments
Advertisement

The Osun state chapter of the Peoples Democratic Party (PDP) has protested the alleged disbandment of the governorship election petition tribunal in the state.

The party members held the protest on Thursday at the premises of the election tribunal in Osogbo, the state capital.

Niyi Owolade, a chieftain of the PDP, said that they were surprised when the officials of the tribunal informed them that the panel has been disbanded.

He said stakeholders were not told the reason why the tribunal was disbanded or when a new one would be constituted.

Owolade said the party had filed a petition, on Tuesday, challenging the outcome of the September governorship poll.

He added that while the Independent National Electoral Commission (INEC) had been served, Gboyega Oyetola, governor-elect of the state, and the All Progressives Congress (APC) allegedly declined service, hence their application for substituted service.

“The application would have been heard this morning (Thursday) but we were surprised when we heard that the panel had been disbanded,” Owolade said.

“What is even more surprising is that they disbanded a panel without a replacement.

“We all know that election petition matters are sui jeneris, our 180 days started counting from 16th October, and Section 285, sub-section 6 of the 1999 Constitution is clear on that.

“By the 180 days duration, final judgement on this matter is to be delivered on or before April 15, 2019, and time is of essence.

“We are surprised that the president of appeal court, who is saddled with the responsibility of constituting election tribunals, has not deemed it fit to put in place a new panel.”

The PDP chieftain asked the president of the appeal court to immediately constitute a new panel to continue with the petition without further delay.

Meanwhile, Muhammed Adamu, the secretary to the tribunal, confirmed the disbandment of the panel but said he does not know the reason for the action.

“It is true that the election tribunal has been disbanded but the reason for the disbandment was not communicated to me,” NAN quoted him to have said.

Ademola Adeleke, governorship candidate of the PDP, had said the exercise was rigged in favour of his opponent.

TWITTER @thecableng
Copyright 2020 TheCable. All rights reserved. This material, and other digital content on this website, may not be reproduced, published, broadcast, rewritten or redistributed in whole or in part without prior express written permission from TheCable.
Tags
Ademola AdelekeAPCGboyega OyetolaINECMuhammed AdamuNiyi OwoladeOsunPDP
Advertisement