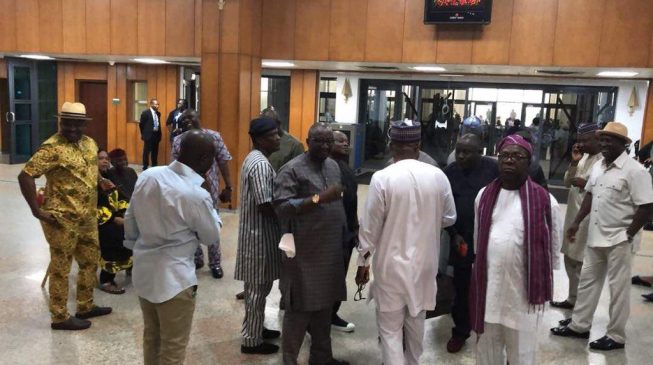 09:59 2018
Print This Article Share it With Friends
👤by Chinedu Asadu  0 Comments
Advertisement

He said while operatives of the Department of State Services (DSS) barricaded the entrance of the complex, the PDP lawmakers were inside “holding (a) meeting and even drinking whiskey”.

The siege took place amid rumours of a purported plan to impeach Senate President Bukola Saraki.

Most of the All Progressives Congress (APC) lawmakers said to be plotting the impeachment were away from the complex during the siege, except for a few of them including the deputy speaker of the house of representatives.

Speaking during a Channels TV programme on Wednesday, Ojudu said “it was the height of it” for the hooded state officials to prevent entry into the complex “whereas some lawmakers were in there, holding (a) meeting and even drinking whiskey”.

“There were photos of the PDP lawmakers, about 30 of them – a mixture of senators and reps – where they sat down at the lobby, drinking whiskey,” he added.

Ojudu said the presidency was alerted immediately the news of the siege broke and it was discovered there was no planned impeachment as was being reported.

“I was asked to go and find out what was happening at the national assembly. I got there at about 11am and I found about 25 or 30 lawmakers of the PDP sitting down at the lobby and I  didn’t see anything (regarding the rumoured impeachment plot),” he said.

“When this was happening, they were on their normal caucus meeting. No single member of the APC was at the premises of the national assembly.

The presidential aide also dismissed speculations that President Muhammadu Buhari would not have acted decisively on the siege just as Acting President Yemi Osinbajo did.

According to him, “many of you don’t seem to know President Buhari at all. He is not that kind of person (that would not act). He is a very just kind of person. If he was around, he probably wouldn’t have allowed this kind of thing to happen without some kind of sanctions”.

TWITTER @thecableng
Copyright 2020 TheCable. All rights reserved. This material, and other digital content on this website, may not be reproduced, published, broadcast, rewritten or redistributed in whole or in part without prior express written permission from TheCable.
Tags
APCBabafemi OjuduDSSDSS siegenational assemblyPDPsenators
Advertisement