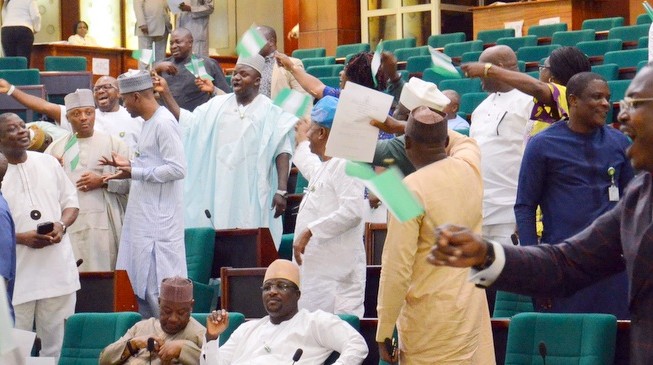 17:31 2016
Print This Article Share it With Friends
👤by Dyepkazah Shibayan  0 Comments
Advertisement

The Peoples Democratic Party (PDP) caucus in the house of representatives says the federal government corrected itself by withdrawing the forgery charge against Bukola Saraki, senate president, and Ike Ekweremadu, deputy senate president.

The duo was alongside Salisu Maikasuwa, former clerk of the national assembly, and Ben Efeturi, former deputy clerk, accused of forging the senate standing rules in June 2015.

In a statement on Saturday, Leo Ogor, minority leader of the house and head of the caucus, said the decision of the government vindicated the observation in the lower chamber at a plenary session in June “that the entire forgery saga was a deliberate and concerted attack on the national assembly to render it useless”.

“We commend the federal government for summoning up the courage to correct itself and right the grievous wrong done, not only to these gentlemen, but also to the institution of the national assembly and nation’s image,” he said.

“Not only were the criminal charges a violation of the hallowed principle of separation of powers and in contempt of a pending litigation before the Federal High Court, Abuja, challenging the said police investigation and report, also our view that the names of hitherto accused persons could not be related in any way to the proof of evidence adduced by the AGF has been vindicated.

“With the distractions occasioned by these contrived and bogus charges over, we believe the National Assembly, especially the Senate, can now direct its total energies at the economic hardship facing the nation.

“We call on the Federal Government to eschew all future targeting of the opposition or those who hold contrary views to it. Jungle justice should find no foothold in the sanctuary of democracy.

“Those entrusted with the people’s mandates must also understand the harm they do to the country’s image, democratic credentials, and prospects of foreign investments by their whimsical actions, vindictive trials, and utter disrespect for the rule of law and separation of powers.

“The withdrawal of charges notwithstanding, we enjoin all lovers of democracy, to keep their eyes wide open to protect our democracy, knowing that where dictatorship is allowed to raise a chapel in democracy, it will not be long before it erects a cathedral.”

TWITTER @thecableng
Copyright 2020 TheCable. All rights reserved. This material, and other digital content on this website, may not be reproduced, published, broadcast, rewritten or redistributed in whole or in part without prior express written permission from TheCable.
Tags
bukola sarakiDeputy Senate President Ike Ekweremaduforgery chargehouse of representativesnational assemblyPDP
Advertisement