PDP to Buratai: Concentrate on your demanding assignment, NOT politics 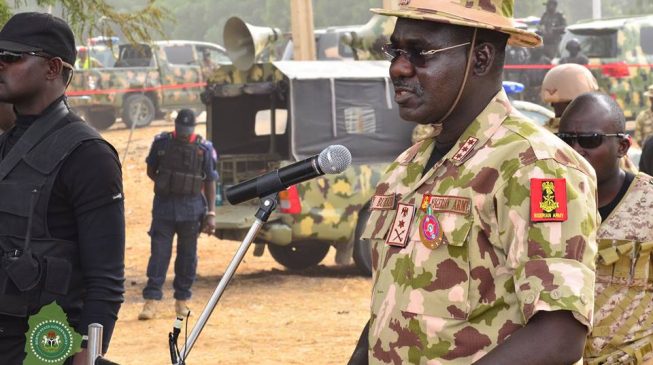 20:36 2019
Print This Article Share it With Friends
👤by Taiwo Adebulu  0 Comments
Advertisement

The Peoples Democratic Party (PDP) has asked Tukur Buratai, chief of army staff, to concentrate on ending the Boko Haram insurgency instead of “dabbling into politics”.

In a statement on Wednesday, Kola Ologbondiyan, PDP spokesman, asked Buratai to refrain himself from acts or actions that will suggest in any way that the military has become an arm of a political party.

Reacting to a statement by the chief of army staff that the military is bound to obey orders from President Muhammadu Buhari in dealing with ballot box snatches, Ologbondiyan said the president lacks the power to deploy soldiers for elections.

He said the deployment of the military for the elections is an attempt by Buhari to suspend the constitution and assume the role of an emperor.

“Gen. Buratai’s allusion to the people’s candidate, Atiku Abubakar, as well as his threats to officers and ranks to execute the unlawful order by President Muhammadu Buhari to participate in the electoral process is an aberration of our laws and a recipe for crisis,” Ologbondiyan said.

“Gen. Buratai is counseled to note that the loyalty of the military is to the state and that the President lacks the powers, under our laws, to deploy soldiers for the conduct of elections.

“Our party urges Gen Buratai to concentrate on his very demanding assignment of protecting the territorial integrity of our nation and ending insurgency rather than dabbling into partisan politics at the risk of our national cohesion.

“It is imperative to state that by trying to drag the military to participate in the February 23 Presidential elections, President Buhari plots to suspend our constitution, assume the position of an emperor, trigger unrest, subvert our electoral process and derail our democracy.”

The PDP asked Buhari and Buratai to end their rationalising of military option as the courts have summarily dismissed the arguments that soldiers are needed to guarantee peaceful elections.

“It may interest President Buhari to know that the judgment was sequel to a suit filed by the APC Leader in the House of Representatives, Femi Gbajabiamila, seeking a declaration that deployment of soldiers during elections is illegal and unconstitutional, ” Ologbondiyan said.

“In case, President Buhari is not aware, as usual, the court directly held that “the Armed Forces have no role in elections” and if soldiers must vote, they must do so in their barracks.

“The PDP therefore cautions President Buhari not to allow his desperation to push him to corrupt the patriotism of our military and use them against innocent Nigerians, whose only demand is for a free, fair and credible election.”

TWITTER @thecableng
Copyright 2020 TheCable. All rights reserved. This material, and other digital content on this website, may not be reproduced, published, broadcast, rewritten or redistributed in whole or in part without prior express written permission from TheCable.
Tags
2019 general electionatiku abubakarballot boxKola OlogbondiyanNigerian ArmyPDPTukur Buratai
Advertisement