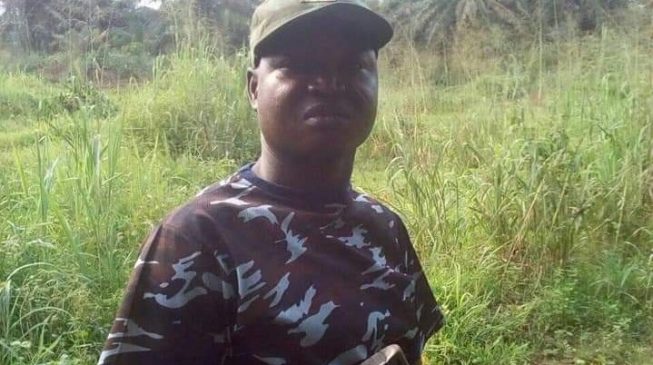 13:11 2019
Print This Article Share it With Friends
👤by Mansur Ibrahim  0 Comments
Advertisement

Sunday Japhet, a policeman who said Nigeria is led by evil people, has been arrested by the Yobe state police command.

Sunmonu Abdulmaliki, Yobe commissioner of police, confirmed the arrest of Japhet, but did not go into details.

Before his arrest, Japhet had said he was not afraid of losing his life for speaking the truth to power.

He had complained about being owed salaries, expressing the wish that he and his colleagues could stage a protest over the incident in order to attract public sympathy.

The officer used Facebook as an avenue to express his feelings. On August 4, he wrote: “O God! My country, so, is it that if mobile police on special assignment did (do) not protest and tell the whole world that they have no been paid, police authority or federal government of Nigeria will not pay them? I pray this very protest on 14 will bring attention of those has good in mind to speak for us.” 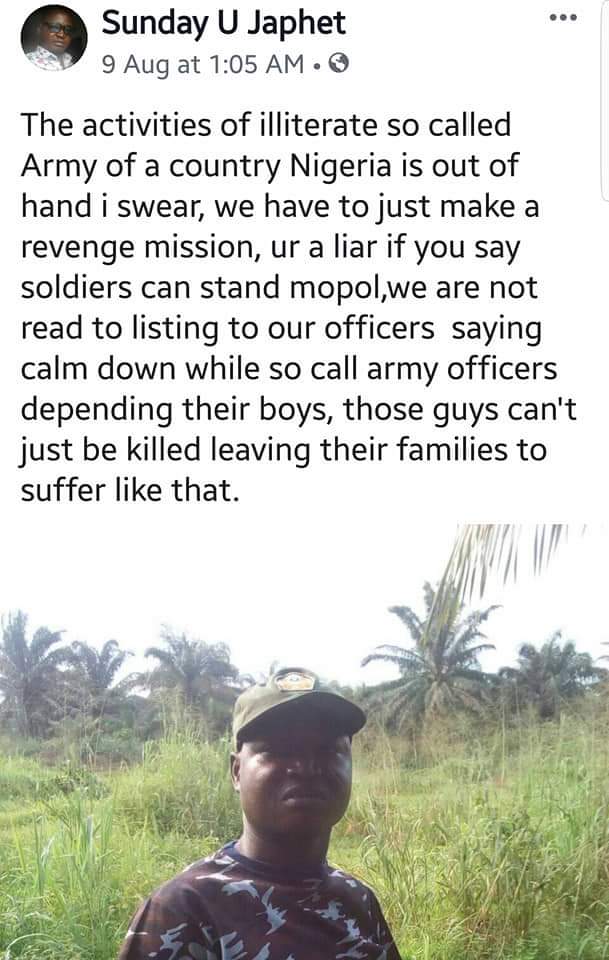 Five days later, he took to Facebook to complain over the way President Muhammadu Buhari has been “handling this country”.

“This is Nigeria, with a president who wants to fight corruption and tackle insecurity, with his vice who claims to be a man of God without truth, with many elected senators, with IGP that we think things will change (under him), it’s a pity for them,” he wrote. 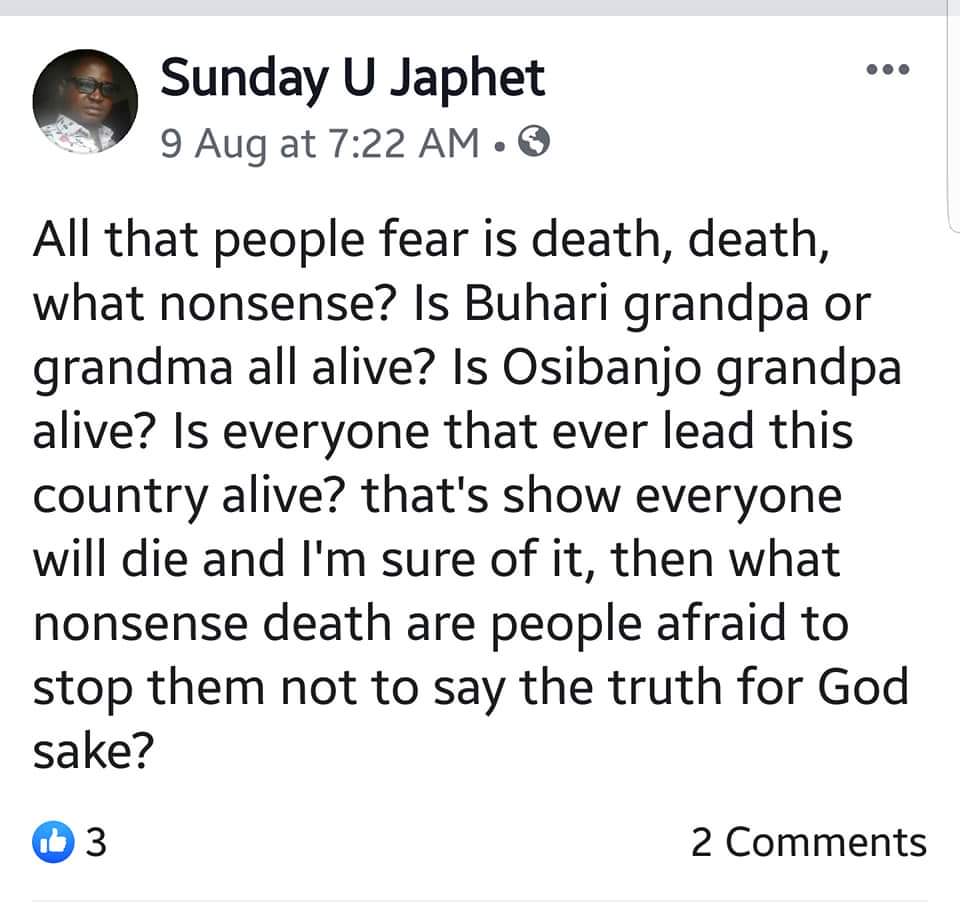 “Those that lead this country, I pray that this demonstration that is going to happen on 14 /8 in Maiduguri, Yobe, Adamawa and other places that mobile police on special duty are going to hold for their allowances the beginning of something in this great country led by evil men.

“We are inviting all the media to be there for us, this people call their self leaders are all aware that this money use to be in some people joint account to get interest,then after 3-4 month they pay, no one will say he don’t know what is happening that this money is not paid. God will come down himself to help Nigerian if really this is Buhari handling this country this way, I better die for truth then to be, seeing nonsense. 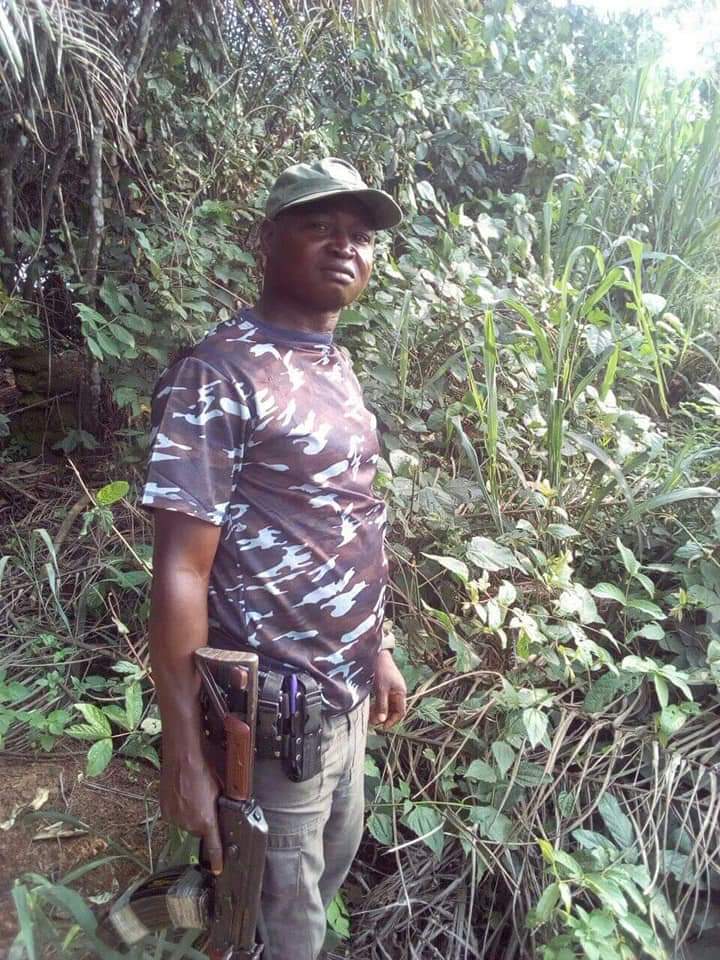 Japhet did the unexpected

“All that people fear is death, death, what nonsense? Is Buhari grandpa or grandma alive? Is Osibanjo grandpa alive? Is everyone that ever lead this country alive? That’s show everyone will die and I’m sure of it. Then, what nonsense death are people afraid to stop them not to say the truth for God sake?”

He also vented his anger over the killing of his colleagues by some soldiers in Taraba state, calling for revenge.

“The activities of illiterate so-called army (soldiers) of a country Nigeria is out of hand. I swear, we have to just make a revenge mission, You are a liar if you say soldiers can stand mopol (mobile policemen). We are not ready to listen to our officers saying ‘calm down’ while so-called army officers are defending their boys. Those guys can’t just be killed leaving their families to suffer like that.”

TWITTER @thecableng
Copyright 2019 TheCable. All rights reserved. This material, and other digital content on this website, may not be reproduced, published, broadcast, rewritten or redistributed in whole or in part without prior express written permission from TheCable.
Tags
PoliceSunday JaphetYobe
Advertisement