Police reveal identities of the officers shot dead by soldiers 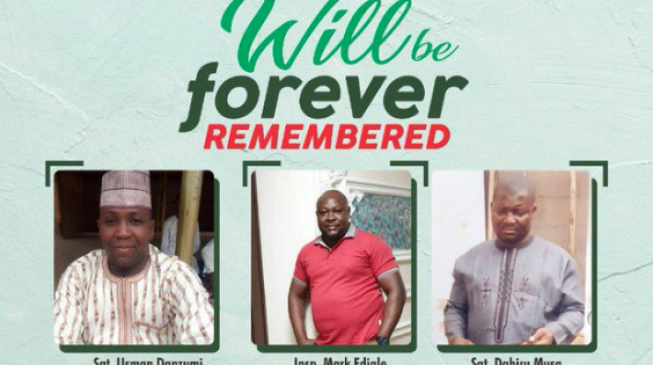 16:49 2019
Print This Article Share it With Friends
👤by TheCable  1 Comment
Advertisement

The police have released the names and photographs of the three officers shot dead by soldiers in Taraba state.

Frank Mba, force spokesman, had announced the tragic incident on Wednesday, narrating how some soldiers opened fire on the deceased officers along Ibi-Jalingo road in the state.

Mba said the operatives were in Taraba to arrest one suspect simply identified as Hamisu. He said the suspect had been “indicted in a series of high-profile kidnap incidents in the state”, adding that the soldiers set the suspect free after attacking the policemen.

The army authorities later said the soldiers felt the policemen were kidnappers.

In a tweet on Thursday, the police released the identities of the men who died in the line of duty.

The picture was accompanied with the message: “Where is Espirt De Corps”.

Espirt De Corps is a feeling of mutual loyalty shared among security operatives.

TWITTER @thecableng
Copyright 2020 TheCable. All rights reserved. This material, and other digital content on this website, may not be reproduced, published, broadcast, rewritten or redistributed in whole or in part without prior express written permission from TheCable.
Tags
frank mbaPolice
Advertisement