Police: El-Zakzaky’s followers attacked us with catapults but we didn’t kill them 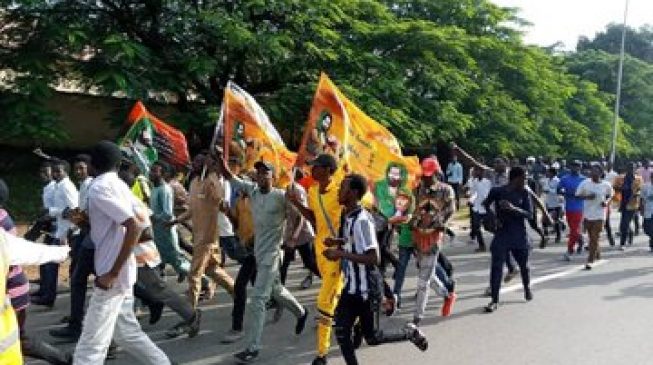 20:47 2019
Print This Article Share it With Friends
👤by TheCable  0 Comments
Advertisement

The police have accused members of the Islamic Movement in Nigeria (IMN) of attacking their men with stones, iron bolts and catapults during their procession in Kaduna on Tuesday.

The police and the sect led by Ibraheem El-Zakzaky clashed in Kaduna earlier in the day.

The IMN had alleged that the police killed three of their members and injured 10 others.

But in a statement, Yakubu Sabo, spokesman of the Kaduna state police command, said a team of policemen dispatched to disperse the “unlawful assembly” and ease traffic congestion were attacked by the group.

He said despite the warning issued to the group against its procession, IMN members came out en masse along Nnamdi Azikiwe expressway Kaduna and at Kasuwan Mata area of Zaria city, blocking highways, causing traffic jam and molesting commuters.

He said the IMN members, who were chanting anti-government slogans, demanded the release of their leader and his wife who have been in detention since December 2015.

”Today at about 0655hrs, we received an information that members of the outlawed Islamic Movement of Nigeria (IMN) popularly known as Shiites came out enmass along Nnamdi Azikiwe Expressway Kaduna and at Kasuwan Mata area of Zaria city respectively on procession in respect of the annual Ashura Day, blocking the public highways, causing traffic jam and molesting commuters,” he said.

“They were chanting slogans and demanding for the unconditional release of their spiritual leader Sheikh Ibrahim Elzakzaky, despite earlier warning by the command yesterday.

“It is on record that both the federal government of Nigeria and the government of Kaduna State have separately proscribed the the group recently.
“Thus, teams of policemen quickly dispatched to the areas with a view to dispersing the unlawful assembly and to manage the traffic.
“However, on sighting the police, the protesters started throwing stones at them, hitting them with iron bolts using catapults. The situation became very tensed and members became violent and unruly.

“In view of these therefore, minimum force was used in dispersing them. The command also wants to make it on record that, up to now, it has not formally received any report of death casualties as claimed by the proscribed group earlier today.”

Sabo advised members of the public to go about their lawful businesses and to report any suspicious behaviour to the police or any law enforcement agency nearest to them.