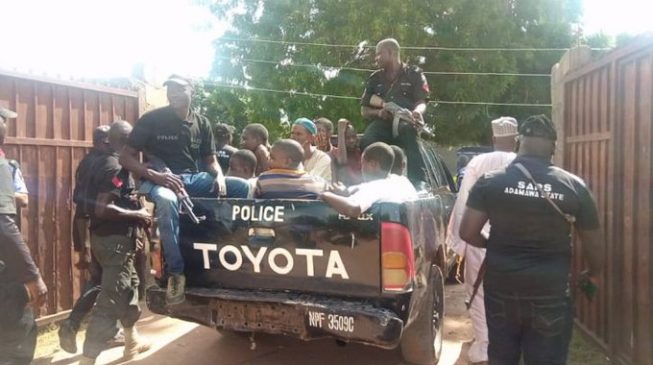 22:41 2019
Print This Article Share it With Friends
👤by Haleem Olatunji  0 Comments
Advertisement

The police have rescued 15 persons from a rehabilitation centre in Adamawa state.

Suleiman Nguroje, deputy spokesman of the state police command, said the victims were found in harsh conditions in Yola, the state capital, on Wednesday.

This is coming less than 24 hours after 11 inmates were rescued at a religious centre in Zaria, Kaduna state.

Nguroje said some of the victims had spent the past year in dehumanising conditions.

He said only two of the rescued persons were teenagers, while other victims were adults within the age bracket of 22 and 46 years.

“They were being chained, humiliated, victimised, subjected to unnecessary torture. They were in chains for 24 hours without feeding and medication,” he said.

The deputy spokesman said the police arrested a man and his three sons for allegedly operating the illegal rehabilitation home.

He said investigation had commenced on the activities of the four suspects.

Three weeks ago, the police raided an Islamic centre at Rigasa, in Kaduna, rescuing at least 300 victims.

TWITTER @thecableng
Copyright 2019 TheCable. All rights reserved. This material, and other digital content on this website, may not be reproduced, published, broadcast, rewritten or redistributed in whole or in part without prior express written permission from TheCable.
Tags
AdamawaPolicerehabilitationtorture centre
Advertisement