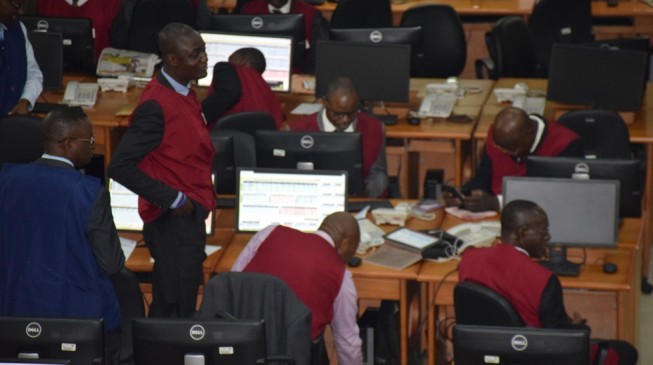 18:58 2019
Print This Article Share it With Friends
👤by Oluseyi Awojulugbe  0 Comments
Advertisement

Investors on the Nigerian Stock Exchange lost N196 billion on Monday due to profit-taking activities during the five hours of trading on the bourse.

Financial analysts had predicted a sour trading day after the Independent National Electoral Commission (INEC) announced a postponement of the general election in the early hours of Saturday when it was scheduled to hold.

The election will now hold on February 23 instead of February 16 while the governorship and state house of assembly elections have also been shifted to March 9 from March 2.

Addressing a press conference on Saturday, Mahmood Yakubu, the INEC chairman, had attributed the postponement to challenges with logistics

Nestle led the gainers’ chart, growing by N35 to close at N1,800 per share and was followed by Betaglass followed with a gain of N6.70 to close at N79.

Dangote Flour increased by 45k to close at N9.60 per share.

Total recorded the highest loss, closing at N190 per share after losing N15 while Mobil Oil and Guaranty Trust Bank closed at N75 and N36.50 respectively to occupy the second and third spot on the losers’ chart.

Shares belonging to Access Bank was the most traded on the stock market.

According to Lukman Otunuga, an analyst with FXTM, the nation might lose $1 billion in GDP as a result of the election postponement.

“The Naira weakened against the Dollar on the forward market today, following the sudden postponement of the Presidential and National Assembly elections over the weekend. With the nation speculated to lose roughly $1 billion in GDP for postponing as result of this, the near-term economic outlook has gone sour.

“However, it may be too early to jump to any conclusions over what impact this could have on sentiment and macro-economic conditions. The uncertainty from this development will certainly impact Nigerian stocks in the near term.”

TWITTER @thecableng
Copyright 2020 TheCable. All rights reserved. This material, and other digital content on this website, may not be reproduced, published, broadcast, rewritten or redistributed in whole or in part without prior express written permission from TheCable.
Tags
2019 general electionIndependent National Electoral Commission (INEC)Lukman OtunugaMahmood YakubuNigerian Stock Exchange
Advertisement

Not every African will get visa on arrival, says immigration boss