Presidential aide asks: Why are people angry over picture of Buhari using toothpick? 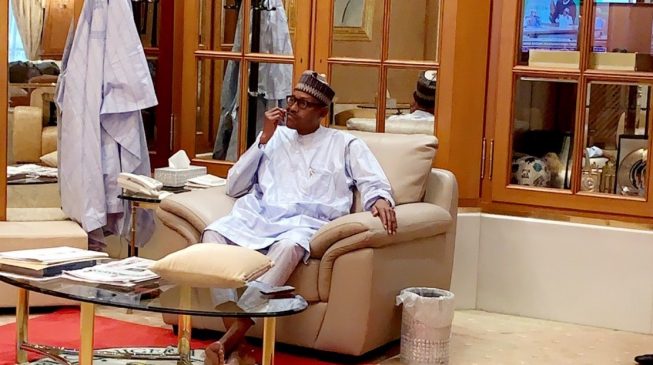 16:05 2019
Print This Article Share it With Friends
👤by Jamilah Nasir  0 Comments
Advertisement

Bashir Ahmad, personal assistant to President Muhammadu Buhari on new media, has expressed shock over the reactions to a picture of the president he posted on social media some months back.

The picture showed Buhari relaxing as he picked what could be remnants of food he had probably just eaten.

A reflection on a glass window in the room showed the president watching himself on the television.

Although Ahmad said he posted the picture on Snapchat, a social media platform, five months ago, the picture resurfaced when an array of insecurity issues, including the killing of three policemen by soldiers in Taraba, were making headlines.

Some condemned it, claiming that the president’s relaxed mood is a reflection of his: “I don’t care” attitude to the challenges plaguing the country”.

Others argued that the president was simply being human while some simply made jokes out of the picture.

While the controversy raged, Ahmad took to Twitter to make some clarifications. He said he “innocently” took the shot on February 27 and that he did not expect that it could elicit such reactions.

“It’s hard to understand why some people are genuinely angry because of this innocent pic. When I innocently snapped it on Feb 27 and posted on my Snapchat, it didn’t occur to me that it’s going to give wailers that strong hit,” Bashir wrote.

It’s hard to understand why some people are genuinely angry because of this innocent pic. When I innocently snapped it on Feb 27 and posted on my Snapchat, it didn’t occur to me that it’s going to give wailers that strong hit. And @BulamaCartoons made an amazing cartoon out of it pic.twitter.com/B2DaQMyz3W

Below are some of the Twitter reactions to the picture:

That a Presidency @AsoRock and their allies found this unflattering “Fiddling-Nero-type-picture” of the @NGRPresident worthy of public view really does take their celebration of deadly Incompetence to a stratospheric realm.
But then, it really is Governance of tooth-picking👎🏾 pic.twitter.com/OwIOUEyxlR

Breaking News:
Muhammadu Buhari @MBuhari is capable of picking his teeth. He is extremely good doing it and we call on the terrorists, bandits, Kidnappers etc to stop abducting maiming & killing citizens and dare Buhari on teeth picking duel!
That's his level of competence. pic.twitter.com/GAfXKrg4zf

My dog has been missing since last week and suddenly @MBuhari started posting pic of himself picking his teeth. @PoliceNG_CRU can you please, help me investigate if Buhari has eating my dog inside Aso Rock? pic.twitter.com/iBg5MZcNBW

I love Buhari for his simplicity. Look at him picking his teeth by himself.

Summary: All by himself. Picking his teeth. He. Buhari. Simplicity. pic.twitter.com/vOKy6TfLXw

The person that released that picture of Buhari picking his teeth must have meant it to be "the human side of Buhari" something not knowing that he gave us a pictorial representation of his lackadaisical attitude towards Nigeria, her issues and the citizens.

This picture of Buhari picking his teeth is nothing but mockery to the plight of the Nigerian people.

I reckon that it was released on purpose., because no one can just waltz into aso rock and snap a President in his utter privacy. This is a distasteful PR for Buhari. pic.twitter.com/PY1TIEdVzF

Wow see how Humble and gentle Buhari is picking his teeth by himself. https://t.co/hK1toygC5s

See him picking his teeth after eating our free food.

which of the 3 areas has he performed? pic.twitter.com/2w2QlPOQZ5

TWITTER @thecableng
Copyright 2020 TheCable. All rights reserved. This material, and other digital content on this website, may not be reproduced, published, broadcast, rewritten or redistributed in whole or in part without prior express written permission from TheCable.
Tags
Buharipictureteeth
Advertisement