Probing my administration alone will amount to witch-hunting, says Jonathan 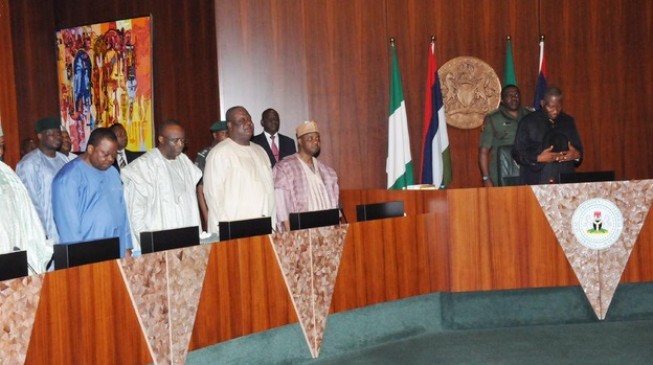 18:14 2015
Print This Article Share it With Friends
👤by Taiwo George  0 Comments
Advertisement

President Goodluck Jonathan has said that the incoming administration is free to investigate the past activities of government but restricting such exercise to his administration would amount to injustice.

Speaking on Wednesday during the valedictory session of the federal executive council, the outgoing president said a lot of things need to be investigated in the country.

“Some people are even calling for the probe of this government, I agree in Nigeria there are a number of things that we will probe. Very many things,” he said.

“I believe that anybody calling for probe must ensure that these probes are extended beyond the Jonathan administration otherwise to me it will be witch-hunting. If you are very sincere, then it is not just the Jonathan’s administration that should be probed.

“Even debts owed by states and this nation from 1960 up to this time, they say it is Jonathan’s administration that is owing all the debt.

“A number of things have gone wrong and we have done our best to fix them. The attorney-general is aware of massive judgments debts, if we aggregate all of them, it is almost going to $1 billion.

“How did we come to this kind of huge judgment debts? These issues should be probed. How do you allocate our oil wells, oil fields, marginal wells and all that do we follow our laws? All these should be probed. And I believe all these and many more areas should be looked at.”

He expressed appreciation to all those who have worked with him, singling out those who were with him till the end. He commended all of them for their efforts but noted that some of them were fond of flattering him.

“First and foremost, we have to thank God that we are here talking to ourselves, reassessing the relationship between and what we have done. Others probably don’t have that kind of luck,” he said.

“I recall that I have devolved quite a number of cabinets‎ and the ministers don’t even know when they are to leave; they will just hear the announcements. At least we have the opportunity, we know we are to leave government on the May 29th.

“For the past five years, for those of you like the attorney-general ‎that has been with us from the beginning and those who joined lately, we have worked together and to me it was quite fulfilling.

“We had many challenges no doubt about that but with God on our sides we have been able to navigate up to this point.

“As‎ ministers you came in at different times, the likes of Aganga are the oldest-serving ministers; others are just few weeks old, they came almost at the time of the elections.

“Let me also thank you for your various positive comments and encomiums, though I think you exaggerate some of them but it is always expected.”

Jonathan listed his achievements and challenged his critics to compare his administration to those of the past.

He said there were deliberate efforts to sabotage his government, making reference to strike action of the Academic Staff Union of Universities (ASUU) and the recent fuel scarcity across the country.

TWITTER @thecableng
Copyright 2020 TheCable. All rights reserved. This material, and other digital content on this website, may not be reproduced, published, broadcast, rewritten or redistributed in whole or in part without prior express written permission from TheCable.
Tags
Goodluck Jonathannigeriareuben abati
Advertisement