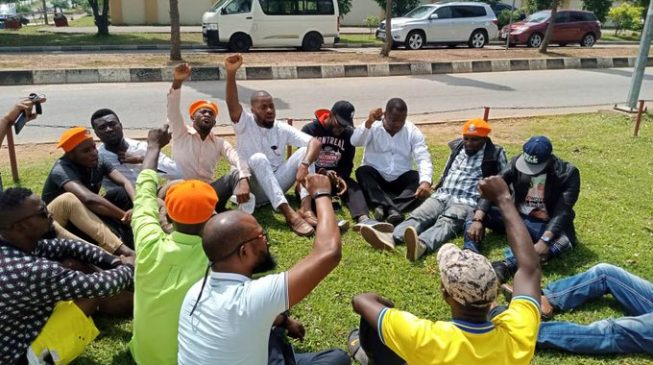 13:22 2019
Print This Article Share it With Friends
👤by TheCable  0 Comments
Advertisement

A protest broke out at the headquarters of the Department of State Services (DSS) on Saturday over the continued detention of Omoyele Sowore, convener of RevolutionNow Movement.

Sowore was arrested in Lagos on August 3 and subsequently flown to Abuja where he is being detained.

Last month, a federal high court in Abuja granted him bail but the secret police refused to release him despite fulfilling the bail condition.

On Friday, Peter Afunanya, spokesman of the secret police, acknowledged that the agency had received the order to release Sowore but said the service had not freed him because no one showed up on his behalf.

However, on Saturday morning, lawyers, supporters and family members of the activist visited the DSS headquarters but were denied access to Sowore.

Abubakar Marshal, one of the activist’s lawyers, arrived at the DSS office at 10am alongside some members of Sowore’s family but security operatives prevented them from gaining access to the facility.

The operatives manning the gate had asked them of their mission and the lawyer introduced himself, saying he was was there to pick up his client.

But they said he would not be allow in until they got clearance from their superiors. This led to altercation as the lawyer vowed not to leave there until Sowore is out.

In the heat of the argument, a legal director at DSS put a call to Marshal, saying he was not around.

This prompted some of the supporters of Sowore to stage a protest outside the headquarters of the secret police.

They vowed to continue occupying the DSS headquarters until Sowore is released. After waiting for over three hours, some of the lawyers left.

The statement of Afunanya that Sowore was not released because no one showed up on his behalf had sparked outrage among Nigerians.

Femi Falana, lead counsel of the activist, had countered Afunanya, saying lawyers who spent at least four hours at DSS headquarters in connection with Sowore’s detention were not attended to on Wednesday.