Quadri is world’s table tennis player of the year 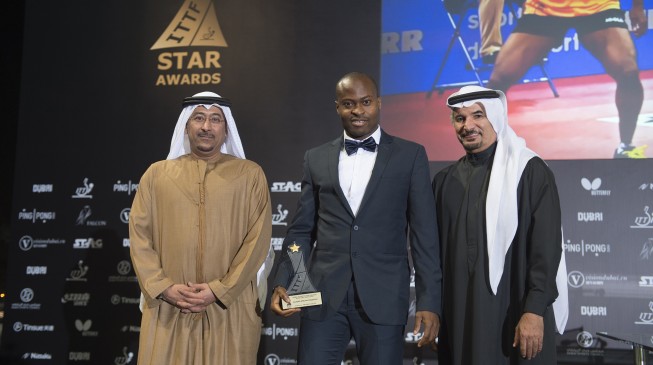 00:08 2015
Print This Article Share it With Friends
👤by Victor Akhidenor  0 Comments
Advertisement

Aruna Quadri has been named the International Table Tennis Federation (ITTF) Star Player of the year.

At the award ceremony held on Wednesday at the Armani Hotel in Dubai, United Arab Emirates, Quadri claimed two awards ahead of players from Asia and Europe.

The world’s number 30 ranked player beat world number one, China’s Xu Xin and his compatriot, Fan Zhendong as well as Portugal’s Marcos Freitas to the gong.

Also, Quadri’s crucial winning point against Olympics and World Champion, Jan Zhike of China at the 2014 ITTF World Cup was adjudged the best in the Star Point category at the second edition of the award.

An elated Quadri described the award as the best in his career.

“This is the best day of my career and I want to thank the organisers for considering me for this. I also want to thank all my fans all over the world for their support because this is unbelievable for me and I promise to continue to work hard,” he said.

For the female star player of the year, China’s Ding Ning beat world number one Feng Tianwei of Singapore, Kasumi Ishikawa of Japan and China’s Liu Shiwen to the award.

TWITTER @thecableng
Copyright 2020 TheCable. All rights reserved. This material, and other digital content on this website, may not be reproduced, published, broadcast, rewritten or redistributed in whole or in part without prior express written permission from TheCable.
Tags
Aruna QuadriInternational Table Tennis FederationITTF
Advertisement