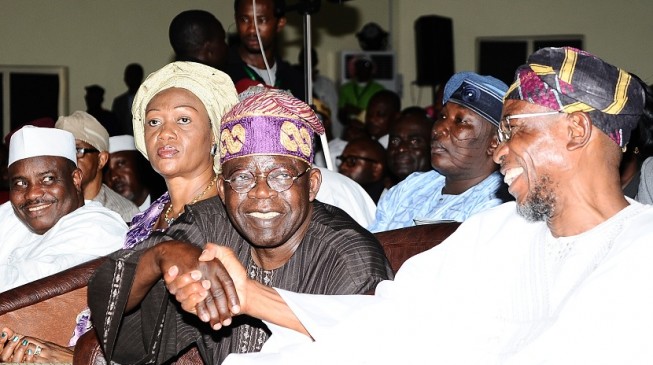 09:17 2014
Print This Article Share it With Friends
👤by TheCable  1 Comment
Advertisement

Osun voters should reject bribes offered by Peoples Democratic Party (PDP) ahead of Saturday’s governorship election in the state, a national leader of the All Progressives Congress (APC), Asiwaju Bola Tinubu, has said.

“People of Osun must not collect bribe from Peoples Democratic Party. We have offered you better life, good jobs will be offered the youths and we will maintain the register of progress in this state.

“APC is the party for the masses with the capacity to care for the people. I want you to know that the FG is using your money to pay the soldiers and the police brought here. Don’t run away from them so that you can protect your votes.

“If they fail in their duty to provide security for you, we will protest their oppression. They cannot chase us away from our votes,” he said at the rally for the incumbent, Governor Rauf Aregebesola, on in Osogbo on Tuesday.

Describing President Goodluck Jonathan as “incompetent and unfit” to rule the country, Tinubu faulted the use of soldiers for the elections.

He said: “President Goodluck Jonathan does not understand what it means to govern. He knows nothing about good governance. He’s confused.

“How can he bring soldiers to Osun because of election and claimed to be protecting youth corps members, when he should have used that force to stop the killing of our people in the North?”

The party’s chairman, Chief John Odigie-Oyegun, said the party would not recognise any government formed through “a stolen mandate” in 2015.

He said APC would form a parallel government instead.

TWITTER @thecableng
Copyright 2020 TheCable. All rights reserved. This material, and other digital content on this website, may not be reproduced, published, broadcast, rewritten or redistributed in whole or in part without prior express written permission from TheCable.
Tags
APCBola Tinubuosun pollrauf aregbesola
Advertisement