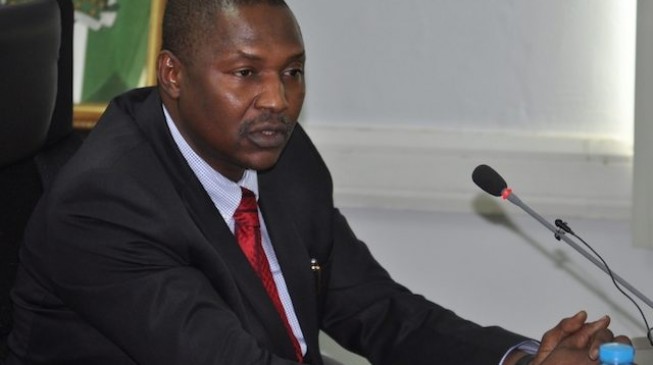 18:54 2016
Print This Article Share it With Friends
👤by Dyepkazah Shibayan  1 Comment
Advertisement

The house of representatives has threatened to issue a warrant of arrest on Abubakar Malami, attorney-general of the federation (AGF), if he did not appear before an ad hoc committee of the lower chamber on November 29.

The ad hoc committee is investigating the invasion and arrest of judicial officers by the Department of State Services (DSS).

The DSS had raided the homes of seven judges on allegations of corruption.

At the public hearing on Thursday, Garba Datti, chairman of the committee, said Malami was invited to explain his role in the invasion of the judges home by the DSS.

“The only area we are having problem is the AGF who is the chief law officer. We sent letters to him, no answer and no memorandum from him. Before the public hearing, we had summoned him even today, he did not appear or sent any representation,” Datti said.

“This committee is disturbed by the non appearance of the AGF. We have given him the opportunity to appear on Tuesday (next week) 29th November, failure of which this committee will invoke all the relevant laws that give us power for arrest.”

Speaking earlier, Ibrahim Magu, acting chairman of the Economic and Financial Commission (EFCC), denied the involvement of his commission in the DSS raids.

Magu who was represented by Johnson Ojogbana, an assistant director, prosecution unit in the EFCC, told the committee that the commission was mandated to investigate and prosecute all financial crimes.

“I can say that EFCC was not involved in that wee hours operation. We have been investigating some judges and our modus operandi have been painstaking,” he said.

“What we did was to state the powers of the EFCC and where we derived our powers from over the years and to add that EFCC has the mandate to investigate and prosecute all economic and financial crimes in the last 13 years and we have lived up to expectations.”

However, Lawal Daura, director-general of the DSS, asked the committee for a closed-door session.

Daura refused to disclose to journalists what transpired in the session.

TWITTER @thecableng
Copyright 2020 TheCable. All rights reserved. This material, and other digital content on this website, may not be reproduced, published, broadcast, rewritten or redistributed in whole or in part without prior express written permission from TheCable.
Tags
Abubakar MalamiDSShouse of representatives
Advertisement