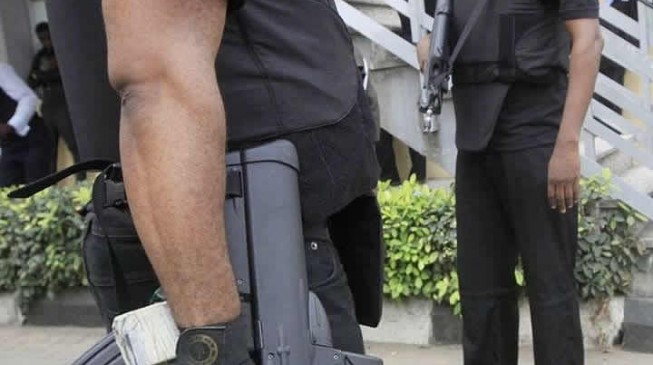 15:31 2019
Print This Article Share it With Friends
👤by Chinedu Asadu  0 Comments
Advertisement

The house of representatives has resolved to investigate the invasion of the federal high court premises in Abuja by the Department of State Services.

Operatives of the agency had broken into the court while attempting to rearrest Omoyele Sowore, convener of the RevolutionNow movement.

The lower legislative chamber made the resolution following a motion introduced during Tuesday’s plenary session by Ndudi Elumelu, the minority leader.

Elumelu said the lawmakers need to investigate the incident which he describe as an attempt to overpower the judiciary.

He condemned the “exhibition of thuggery, brute force, lawlessness, contempt and disregard for the rule of law” during the incident at the court.

“A situation where one arm (of government) is seen to be overpowering another in the course of dispensing her duties, will definitely spell doom for the separation of powers as enshrined in the Constitution,” he said.

“The actions of these unidentified persons disrupted judicial proceedings on the 6th day of December 2019,and made the presiding judge to abandon her duty post because of safety concerns.

“This is a complete desecration of the temple of justice and such an action should be completely discouraged.”

He said if the “abuse” is not checked, the national assembly “may one day be invaded and the relevant security agencies will claim not knowing who the offenders are.”

The matter was subsequently referred to the relevant house committees to investigate the matter and report back within two weeks.

TWITTER @thecableng
Copyright 2020 TheCable. All rights reserved. This material, and other digital content on this website, may not be reproduced, published, broadcast, rewritten or redistributed in whole or in part without prior express written permission from TheCable.
Tags
DSShouse of repsomoyele sowore
Advertisement