Wamakko on Tambuwal’s defection: When I go back to Sokoto, you’ll see who’s really in charge 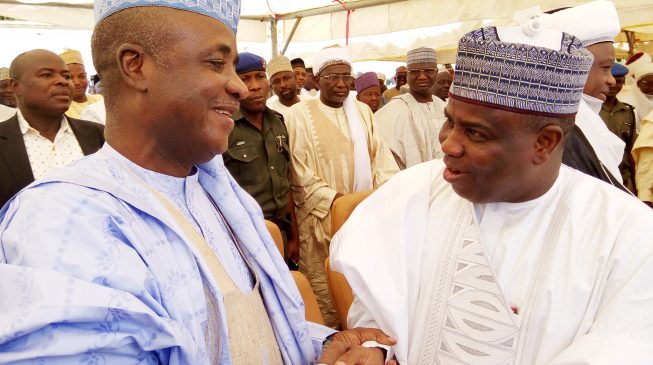 09:35 2018
Print This Article Share it With Friends
👤by Jamilah Nasir  3 Comments
Advertisement

Aliyu Wamakko, senator representing Sokoto north, says in a few days time, it will be clear which party is really in control of the state.

Wamakko said this in reaction to the defection of Aminu Tambuwal, the state governor, from the All Progressives Congress (APC) to the Peoples Democratic Party (PDP).

Tambuwal was elected speaker of the house of representatives under the platform of PDP but defected to APC in 2014.

He won the governorship ticket of the APC and defeated the PDP candidate in the 2015 election.

Wamakko commented on Tambuwal’s defection during an interview on NTA network news, saying Sokoto is “solidly” an APC state.

The senator said the people of the state are behind him and the other lawmakers who are still in the ruling party.

He said there is no cause for alarm, urging people to disregard “whatever you might have seen”.

“Let me assure you that the Sokoto state where I come from is an APC state. The entire state is solidly APC,” Wamakko said.

“Insha Allah by Saturday or Sunday when I get back to Sokoto, you will see who is really in charge of Sokoto. I am assuring you that there is no cause for alarm.

“Whatever you might have seen or might have been told, just take it as a mere story. What I am sure is that Sokoto state is solely an APC state.

While Tambuwal defected, Ahmed Aliyu, his deputy, is still in the APC.

TWITTER @thecableng
Copyright 2020 TheCable. All rights reserved. This material, and other digital content on this website, may not be reproduced, published, broadcast, rewritten or redistributed in whole or in part without prior express written permission from TheCable.
Tags
Aliyu WamakoAminu TambualAPCdefectionSokoto
Advertisement