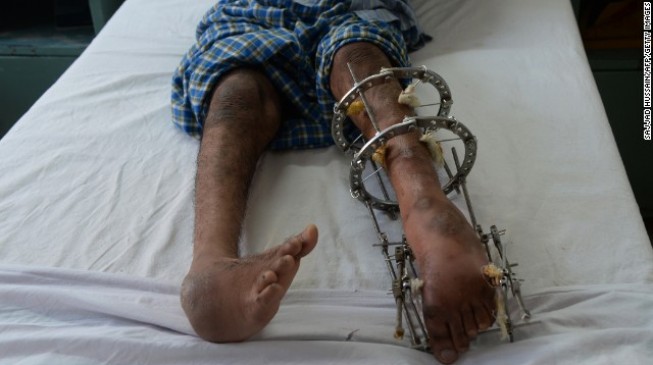 13:25 2016
Print This Article Share it With Friends
👤by Ogechi Ekeanyanwu  0 Comments
Advertisement

Three days later, the federal ministry of health, in conjunction with the UNICEF, released a statement announcing a new outbreak of the disease. Two children from Gwoza and Jere local government areas (LGA) of Borno state were affected.

CHR and Partnership for Advocacy in Child and Family Health Project (PACFaH) had lamented, in the statement on the website, the non-release of funds for routine vaccines, saying it was capable of causing Nigeria to lose gains derived in the last two years.

“The non-release of the Routine Immunization funds to the relevant agencies in charge of implementation exposes Nigeria to a possible reversal of the achievements of two years since the interruption Wild Polio Virus in Nigeria,” CHR had said.

The organisations “expressed fears that the image of Nigeria in the global community since the interruption of polio has improved but further delay of funds by the Ministry of Finance would have severe consequences in the country and global support that it receives”.

Sadly, 72 hours later, Isaac Adewole, minister of health, confirmed the outbreak — though, he attributed it to prior inaccessibility of the community.

The minister also said the outbreak serves as a reminder that the country needs to remain vigilant and immunise all eligible children.

“The discovery and confirmation of the outbreak was as a result of strengthened surveillance due to improved accessibility which has been made possible by the recent military action in liberating more communities in the north-eastern part of the country,” the statement read.

“The detection of children paralyzed by polio shows that surveillance has increased with more access but it is a reminder that the country needs to remain vigilant and immunize all eligible children with polio vaccine until polio is completely eradicated worldwide.”

Vaccine campaigners, including the CHR and PACFaH consortium, have been calling on the federal government to release funds for routine immunisation as allocated in the budget.

The funds for vaccines represent 45% of the total health budget.

TWITTER @thecableng
Copyright 2020 TheCable. All rights reserved. This material, and other digital content on this website, may not be reproduced, published, broadcast, rewritten or redistributed in whole or in part without prior express written permission from TheCable.
Tags
communityimmunisepolioresurgenceVaccine
Advertisement