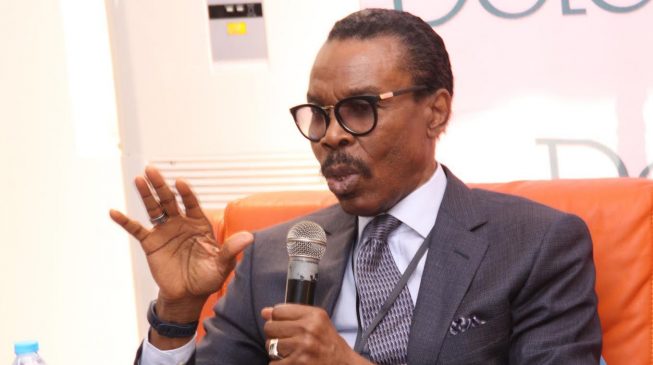 17:31 2019
Print This Article Share it With Friends
👤by Femi Owolabi  2 Comments
Advertisement

Bismarck Rewane, a member of the economic advisory council, says Nigeria is not short of ideas but the country lacks mental discipline to execute ideas.

Rewane said this on Tuesday at The Platform, an annual conference organised by Covenant Christian Centre in Lagos.

He said credibility does not come from what is being said but done, adding that what people want are results and impacts.

“Nigeria is not short of ideas, it is the mental discipline that matters the most. We are tired of summits and are having ‘conference fatigue’,” he said.

“Today, China has an economy of over 13 trillion dollars. China grew not just because of new ideas, but because of mental discipline. The mental discipline is more important than physical discipline. The thought process that goes into conceptualising and executing a plan is very important. In the Nigerian economy, the things outside our control are more than things within our control. When the institutions of conflict resolution are broken, the alternative to what you have is anarchy.

“What we have control over are our credibility and leadership. Social credibility over what we say is important because talk is cheap. Credibility does not come from what we say but what we do. The social contract between the rulers and the ruled is very important as it’s so cheap to just talk than to act.”

He said people are not interested in reasons for failure but how to celebrate success.

He said the economy will get better with intellectual honesty and mental discipline.

“With mental discipline and honesty, we will get a better economy. Success is imperative and cannot be wished, it is a product of smart work. People are tired of being told one thing and then seeing another. If what you see is different from what you feel, then there is a problem of credibility,” he said.

He added that the word “hope” has no place in strategy, and just because this country has come this far, failure is no longer an option.

In September, President Muhammadu Buhari appointed Rewane into the council set up to advise the president on economic policy matters.

TWITTER @thecableng
Copyright 2020 TheCable. All rights reserved. This material, and other digital content on this website, may not be reproduced, published, broadcast, rewritten or redistributed in whole or in part without prior express written permission from TheCable.
Tags
Bismarck RewaneEconomynigeriaThe Platform
Advertisement