Sanusi: My daughter wants to be emir but change has to be incremental 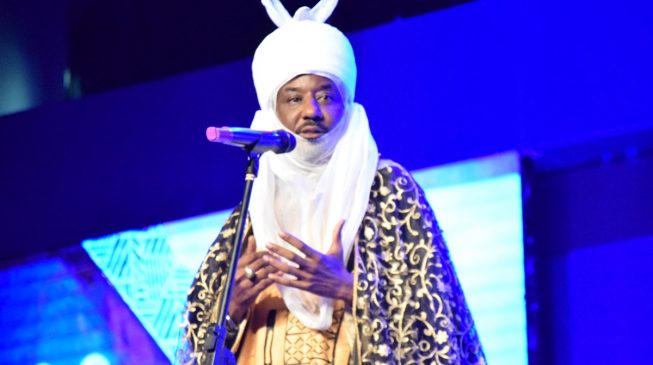 21:23 2018
Print This Article Share it With Friends
👤by Jamilah Nasir  0 Comments
Advertisement

Muhammadu Sanusi II, emir of Kano, says one of his daughters wants to succeed him as the second most ranked Muslim leader in Nigeria.

Sanusi said this in an interview with Financial Times at his Kano residence.

“My daughter wants to be the next emir of Kano, and she’s disappointed I’ve not yet appointed a woman to the Kano emirate council,” Sanusi said.

A father of some female children, the ex-governor of the Central Bank of Nigeria (CBN) did not disclose the identity of the particular daughter.

In April 2017, the monarch sent Shahida, one of his daughters, to represent him at the first annual Chibok Girls lecture.

It was the first time a woman would represent an emir. This sparked reactions in the north.

In a video message played at the BBOG lecture, Sanusi said his children were more radical than him.

“That is the greatest challenge for us. How are you a custodian of a legacy, of a history, of a culture? And how do you also serve as a guide as that culture navigates its way in a modern world?” he asked.

Speaking on the $20 billion allegations of fraud he made before he was suspended as the governor of the apex bank, Sanusi said the money remains “unaccounted for and is never going to be found in one place”.

“The thing about the ‘missing billions’ is you’re never going to find them in one place,” he said, explaining that much of the money was dissipated in complex arbitrage, invoice and subsidy scams.

Sanusi said the clashes between herdsmen and farmers “is a one-sided account”, adding that “villagers have slaughtered hundreds of Fulani without attracting the same opprobrium”.

“Herdsmen have been pushed by the effects of global warming to look for pasture, while their traditional grazing routes have been colonised by settled farmers,” he said.

TWITTER @thecableng
Copyright 2020 TheCable. All rights reserved. This material, and other digital content on this website, may not be reproduced, published, broadcast, rewritten or redistributed in whole or in part without prior express written permission from TheCable.
Tags
daughterEmirFTSanusi
Advertisement