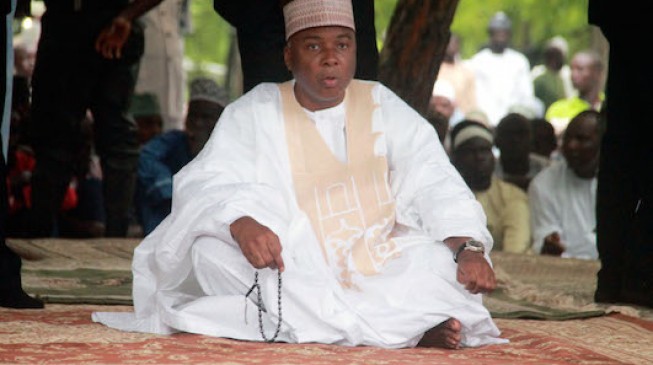 18:12 2016
Print This Article Share it With Friends
👤by News Agency  0 Comments
Advertisement

Senate Presiden Bukola Saraki was conspicuously absent at the Ilorin eid-el-Fitr praying ground where he was attacked in September.

Saraki later said he was in Saudi Arabia for lesser hajj.

“A quick search would show I usually spend last 10 days in lesser hajj,” he wrote on Twitter in response to this story.

Abdulfatah Ahmed, governor of Kwara, was also not there. Both men usually pray at the ground during Sallah celebration, but NAN quoted a top government house official as saying the governor prayed at a private mosque in the state capital.

On Sunday, there was fracas at the palace of the emir during this year’s traditional “night of prayers”.

A source told NAN that mid-way into the programme, a cleric rose to defend government’s inability to pay workers’ salaries and this drew the anger of the people.

The crowd reportedly went berserk, disconnecting the electricity supply to the venue and freely throwing chairs at dignitaries at the event.

Abdulazeez Arowona, secretary of Sheikh Alimi Foundation, confirmed that the programme was disrupted.

Last year, some worshippers at the praying ground threw missiles in the direction of dignitaries, including Saraki and Gambari.

While some of them complained about the non-payment of outstanding salaries, some alleged that the bailout funds were being used for “Abuja politics” — an insinuation thought to be in reference to Saraki, who is a former governor of the state.

The protesters were chanting “ole!” (“thief”) continuously as Saraki and other dignitaries left the ground.

Ahmed was absent during the incident.

TWITTER @thecableng
Copyright 2020 TheCable. All rights reserved. This material, and other digital content on this website, may not be reproduced, published, broadcast, rewritten or redistributed in whole or in part without prior express written permission from TheCable.
Tags
Abdulfatah Ahmedbukola sarakiSulu Gambari
Advertisement