Secondus, Saraki: Why Atiku must emerge president in 2019 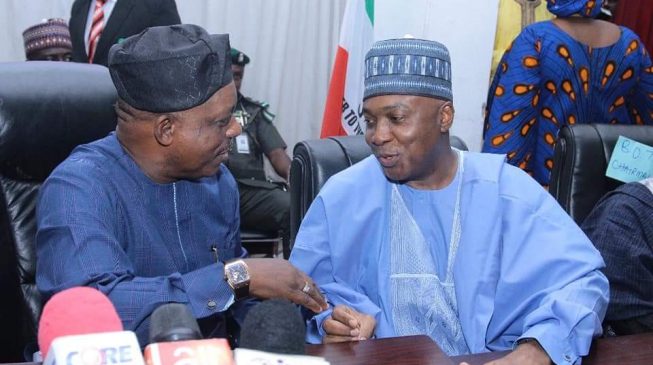 20:10 2018
Print This Article Share it With Friends
👤by Jamilah Nasir  0 Comments
Advertisement

Both men spoke in Abuja when they inspected the party’s presidential campaign office in Maitama on Tuesday.

The senate president was accompanied on the inspection of the campaign office by members of the national working committee (NWC) and other stakeholders of the party.

Saraki is the director general of Atiku presidential campaign committee.

Secondus said the “rebranded and repositioned” party is ready to go to Nigerians with issues when the campaign begins.

According to a statement from his media office, Secondus said the party hopes to have a successful electioneering just like its recently-completed primaries.

On his part, Saraki said everything is set for the party to conduct one of the best presidential campaigns in the history of Nigeria.

He added that Nigerians are anxiously waiting for the party to commence its campaign.

TWITTER @thecableng
Copyright 2020 TheCable. All rights reserved. This material, and other digital content on this website, may not be reproduced, published, broadcast, rewritten or redistributed in whole or in part without prior express written permission from TheCable.
Tags
AtikuDemocracyPDPSarakiSecondus
Advertisement