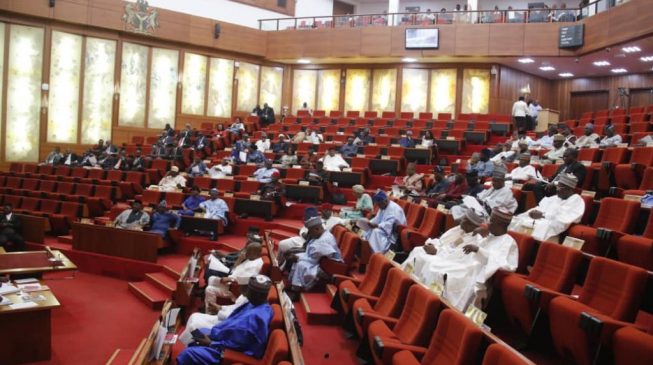 14:36 2019
Print This Article Share it With Friends
👤by Dyepkazah Shibayan  0 Comments
Advertisement

The request of the upper legislative chamber followed a report presented by Abdullahi Gobir, senator representing Sokoto east, on Tuesday.

The senate had setup an ad hoc committee chaired by Gobir to probe pipeline explosions in Komkom, and in Ijegun, Lagos state.

He said the NNPC and its contractors were aware of the pipeline leaks in Komkom and Ijegun, but delayed in taking action.

“That the incidents in Rivers and Lagos states were avoidable if the NNPC/NPSC and the contractors maintaining and monitoring the pipelines were proactive,” he said.

“That NNPC should start the process of deploying modern technology in pipeline surveillance and detection of leakages as well as introduce cathodic protection on the pipelines.

“That NNPC (and NPSC) should refund to the treasury, the outrageous sum of three hundred and eighty-two million two hundred and three thousand fifty-five naira seventy four kobo (N382,203,055.74) only it claimed to have used in firefighting operation in Komkom and provide evidence of compliance to the committee on downstream petroleum sector.

“That NNPC (and NPSC) should carry out proper check on all the petroleum product pipelines across the country to ascertain their status for either repairs or total replacement.

“That the governments of Rivers and Lagos states as well as all pipeline host community leaders should sensitise all occupants of pipeline right of ways to vacate the right of ways.”

TWITTER @thecableng
Copyright 2020 TheCable. All rights reserved. This material, and other digital content on this website, may not be reproduced, published, broadcast, rewritten or redistributed in whole or in part without prior express written permission from TheCable.
Tags
lagosNNPCPipeline explosionsriverssenate
Advertisement