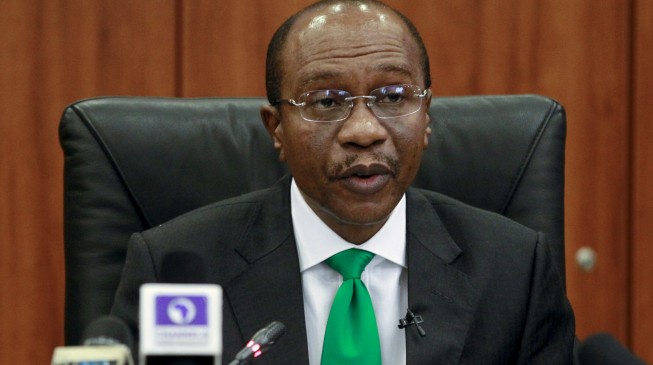 11:17 2019
Print This Article Share it With Friends
👤by Dyepkazah Shibayan  1 Comment
Advertisement

The senate committee on finance has summoned Godwin Emefiele, governor of the Central Bank of Nigeria (CBN), over approved exchange rate for projects under the presidential infrastructure development fund.

Emefiele is expected to appear before the committee on Monday.

In a statement issued on Sunday, Solomon Adeola, chairman of the committee, said Emefiele was invited to explain the exchange rate the CBN approved to finance projects under the presidential infrastructure development fund (PIDF).

The projects are being funded by the Nigeria Sovereign Investment Authority (NSIA).

Adeola said his committee was told that the sum of N163.8 billion has already been spent on the first three projects.

The senator said his committee was informed by Uche Orji, NSIA managing director, that the apex bank used N325 to a dollar instead of the official rate of N305 for the projects.

“We are not indicting the NSIA or conducting an investigation or probe of the CBN but we like to know the reason this different rate was used but we are inviting the CBN to appear together with the NSIA on Monday,” the finance committee chairman said.

Adeola called for caution in the way funds are being disbursed for projects.

TWITTER @thecableng
Copyright 2020 TheCable. All rights reserved. This material, and other digital content on this website, may not be reproduced, published, broadcast, rewritten or redistributed in whole or in part without prior express written permission from TheCable.
Tags
cbnexchange ratesGodwim EmefieleSolomon Adeola
Advertisement