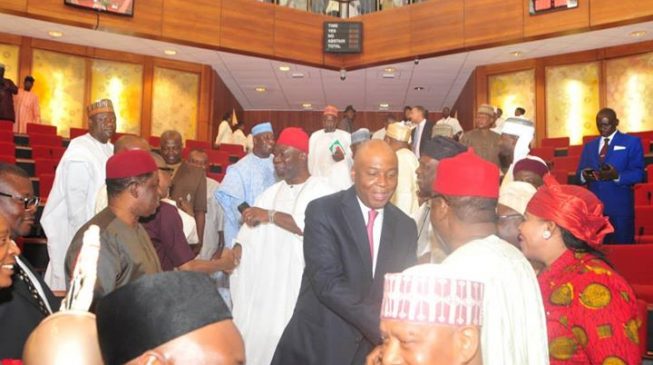 A recent revelation about the monthly jumbo pay of a Nigerian Senator indicates the country is highly infected with a terminal disease. It may takes angels amongst us to reclaim the nation’s soul from the claw of death. Bono had said the greatest disease in the world is corruption and the only cure is transparency. Based on this I am also quick to ask where did we as a people go wrong to be ruled by politicians instead of statesmen and women?

If the calculation done was correct, the total take home of a Nigerian Senator per annum is Three hundred and seventy Million Naira plus. I mean in a country where salary of civil servant is eighteen Thousand Naira per month. A Senator in Nigeria  goes to his/her home everyday, including weekends and public holidays, with a minimum of One Million Naira. I really do not know how our conscience as individual had jumped out of the window and why our milk of human kindness had gone dry. If not I wonder how our distinguished Senators can go home and sleep everyday without any form of guilt with such take home per day?

If truly leadership is a privilege to better the lives of others and not an opportunity to satisfy personal greed like Mwai Kibaki once said, why is it that our Senators are more interested in personal gains than elevating the sufferings of the led? I am beginning to see why many will kill for political position.

In all honesty, what can I do with the same amount a senator takes home per month? I mean with thirteen Million, five hundred thousand Naira. I can build 40 standard bedroom hospital and equip them with beds in many non metropolitan towns and villages across Nigeria. I will still have  a little reserve. Lands are gotten at a give away price and labour is extremely cheap.

With thirteen Million, five hundred thousand Naira, I can keep an average of 500 indigent students in the university for a whole semester(3months) by buying them basic food stuff worth eight thousand five hundred per student per month. Also with the same amount, I can feed about forty five thousand pupils in basic classes in our public schools per day at  three hundred Naira per plate per child. Many states in Nigeria do not have such  number of pupils  in their basic schools.

With the same amount, I can daily take an average of one hundred and thirty five patients(Nigerians) whose ailments can be treated with total sum of ten thousand Naira to the nearest hospital for treatments for free. Do not forget what kills many Nigerians in the rural villages can be resolved with less than two thousand five hundred Naira. It is this same amount which can resolve many issues  is what an individual Senator takes home per month.

One can continue with a long list of what can be done with what a Nigerian Senator takes home per month. In the midst of these glaring sufferings, our Senators can go home with such a huge amount every month and not fill a pinch of pain of the average Nigerian? Rusty Eric had captured this situation well when he said ” as long as greed is stronger than compassion, there will always be sufferings.”

I am still wondering and remain  appalled at  how a Nigerian Senator who daily claims on his own television station ” I want to make a common sense’ can pocket  this same amount  monthly and  feels  cool about it. Who is deceiving who? In real life situation, many of our Senators are made and stable financially if they manage the resources at their disposal well. Considering some of them  had  served two terms as governors,  while those who have not had served in the Senate for one or more terms. They would  have collected severance allowances for job not well done in the past.

But if we fix  the root of the problem where it belongs who can blame our senators for doing what they like? Chinua Achebe once gave a correct interpretation of what makes a good democracy. In any  functioning , robust democracy, there is a need for a healthy educated,participatory followership  who are morally grounded. Followership situation in Nigeria is apathetic and highly biased on the line of ethnic, religion and race. A politician is not corrupt and there is always a sense of victimisation if the individual comes or belongs to our ethnic and religious circles.

Many of the followers we have here are illiterates even though they had a form of education. Many are also morally bankrupt. In which country except Nigeria and possibly other developing countries will people live with this level of penury and pain while their rulers live in open opulence without any reaction capable of reversing  the situation?

In the midst of all these, many supposedly educated Nigerians had not gone to pick up their voters’ card. In Lagos State alone, it was said about one Million four hundred individuals had not picked up their voters’ card. Yet it is these set of ignorant and apathetic citizens that will make the loudest noice in the comfort of their rooms or when they go to the market to buy stuff.

When the students are ready, the teachers will show up. Until then Nigerians should not complain when they hear ‘Now your sufferings continue (NYSC)’. We must all continue to serve our father’s  land with struggle and hardship.

TWITTER @thecableng
Copyright 2020 TheCable. All rights reserved. This material, and other digital content on this website, may not be reproduced, published, broadcast, rewritten or redistributed in whole or in part without prior express written permission from TheCable.
Tags
senators
Advertisement