Shi’ites will NOT take up arms against the army 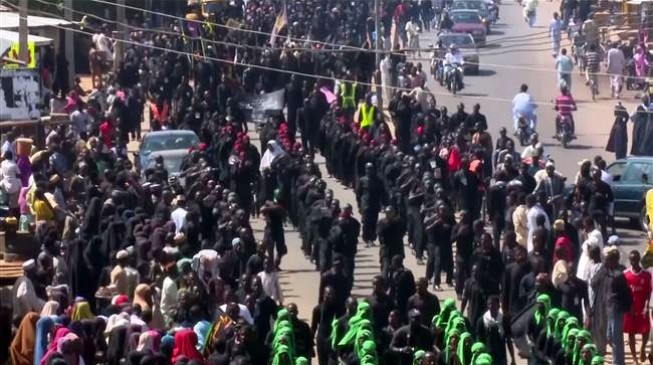 18:06 2016
Print This Article Share it With Friends
👤by Fredrick Nwabufo  0 Comments
Advertisement

The Islamic Movement of Nigeria (IMN), better known as the Shi’ia sect, whose members were killed by soldiers in Kaduna in December 2015, says it will not take up arms against the country.

Ibrahim Musa, spokesman of the religious group, debunked reports that the group was planning a nationwide attack.

“Our attention has been drawn to a report by some online media sites captioned: ‘Alert: Shiites threaten mass revolt nationwide’. The report insinuated that the Islamic Movement of Nigeria under the leadership of Sheikh Ibraheem Yaqoub Zakzaky is planning a revenge mission for the killings done to it by the army in Zaria. The story was predicated on an extracted part of a speech by a member of the Islamic Movement in Kano, which was taken out of context,” he explained.

“We hereby categorically deny that there is any plan to ‘hit back at the army and other symbols of authority’ as claimed by the report.  This is only a ploy to start series of false flag operations whereby attacks will be staged somewhere and these will be attributed to the Islamic Movement as a ‘revenge attacks’.

“It will be recalled that security operatives have for long had a history of planning such attacks, especially when all efforts to justify their atrocities fail woefully. Similar plots were exposed soon after the daylight cold-blooded murder of 34 members of IMN in 2014. It must be made clear however that any such attacks, now or in the future, is not by the Movement or its members as we wish to reiterate that the Islamic Movement in Nigeria has never ever even contemplated taking up arms or use of violence as a means to achieving our aims. We remain committed to our non-violent ways of extending our message of fairness and justice to all irrespective of sect or religion.

“There has never been a single occasion when the Islamic Movement in Nigeria under the leadership of his Eminence Sheikh Ibraheem Zakzaky ever threaten the peace and stability of Nigeria or engaged in any form of violence throughout its 38 years of existence. We  have always been the victims of those who are opposed to justice because of our insistence that due process of law should be followed by those in authority.

“For the benefit of doubt, we restate that we will never be distracted by anyone and no amount of provocation or incitement would make the IMN ever engage in any form of violent activity.

“Our leader Sheikh Zakzaky has said it many times in his discourses that the large following the Movement enjoys among the Nigerian people is not due to the use of arms by the Islamic Movement, but rather by its adherence to truth and justice for all irrespective of religion, tribe and region.

“It seems those that wrote the story assume that the Islamic Movement in Nigeria operates like some terrorist groups created by the enemies of Islam, who release video clips in dissemination of its  message. Such lousy ways are not our modus operandi and we are not anonymous. We have been living as peaceful Muslims for almost four decades and so it is myopic for anybody to attribute violence to us.

In December 2015, members of the Shi’ia sect clashed with soldiers in Zaria, Kaduna state, with the Human Rights Watch (HRW) claiming that more than 300 of them were killed by soldiers.

TWITTER @thecableng
Copyright 2020 TheCable. All rights reserved. This material, and other digital content on this website, may not be reproduced, published, broadcast, rewritten or redistributed in whole or in part without prior express written permission from TheCable.
Tags
Islamic Movement of NigeriaZakzaky
Advertisement