SHOCKER: Buhari says age limit of senators, govs not reduced in ‘Not Too Young To Run’ law 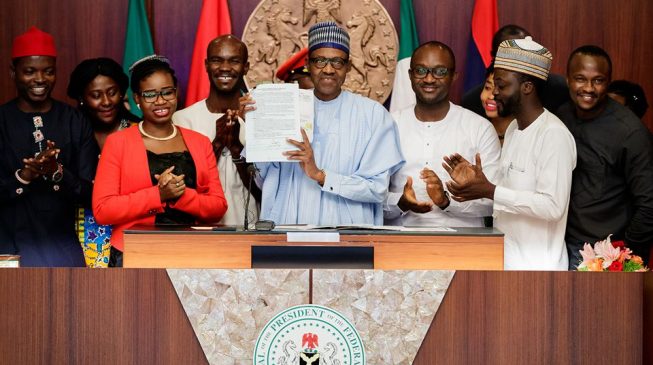 19:32 2018
Print This Article Share it With Friends
👤by Chinedu Asadu  0 Comments
Advertisement

The ‘Not too young to run’ bill does not affect age limit of senators and governors in the country.

This was disclosed by President Muhammadu Buhari who signed the bill into law on Thursday.

The bill seeks to reduce age qualification to hold elective office in the country.

The law will also reduce the age limit for the office of the president from 40 to 35 years.

The bill had also sought to reduce the age bracket for the office of a governor from 35 to 30, and that of the senate from 35 to 30.

“Surprisingly, the age limits for senators and governors was not reduced, as originally proposed by the sponsors of this bill,” Buhari said when he signed the bill.

“This is an issue that may need to be addressed going forward.”

It is not yet clear why the lawmakers removed the provision.

TWITTER @thecableng
Copyright 2019 TheCable. All rights reserved. This material, and other digital content on this website, may not be reproduced, published, broadcast, rewritten or redistributed in whole or in part without prior express written permission from TheCable.
Tags
electionsgovernorshouses of assemblyNot too young to run billPresident Muhammadu Buharisenators
Advertisement