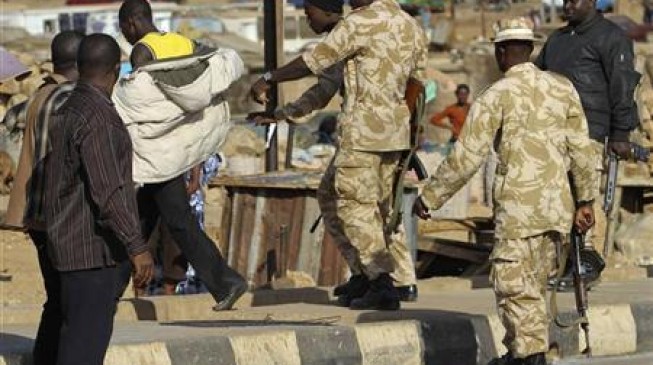 19:27 2017
Print This Article Share it With Friends
👤by Fredrick Nwabufo  2 Comments
Advertisement

Leaders of Sardauna local government council say soldiers have been deployed in their community to wipe out the natives.

On June 17, a clash between two groups – herdsmen and local farmers – in the Mambila area of the council resulted in the death of a number of people.

To stop further bloodshed, Acting President Yemi Osinbajo ordered the deployment of troops in the area.

But in a statement signed by Mohammed Tersi, D M Ismaila and Marcus Bovoa, who described themselves as “Sardauna stakeholders”, the group said the government never responded in such a swift manner to attacks carried out by the Fulani who allegedly sacked villages of the locals in the state.

They claimed that the Fulani planned to scuttle the task of the judicial panel of inquiry which was set up to investigate a dispute over land in the area.

“These two incidents shattered the peaceful atmosphere in the area and created much alarm among the people thereby sparking off the unrest that immediately ensued,” they said.

“Within just 48 hours, the Taraba state police commissioner has temporarily relocated his office to Gembu on the Mambila Plateau, a Hausa-Fulani GOC of the army has been moved to the Mambila Plateau and army battalions have moved in.

“At the same time, a military surveillance helicopter has been dispatched to the Mambila Plateau and is hovering over the plateau to protect the Fulanis. This is in sharp contrast to the army’s refusal to respond to calls for intervention in the mass murders perpetrated by the Fulani herdsmen against the defenceless people of Takum, Ussa, Lau, Donga, Bali, and Yorro local government areas in Taraba state. Similarly, the genocide committed against the villagers in Agatu in Benue state, southern Kaduna, Kogi, Ekiti, and Delta states, etc never attracted the army’s response despite the nationwide outcry.

“Similarly, the genocide committed against the villagers in Agatu in Benue state, southern Kaduna, Kogi, Ekiti, and Delta states, etc never attracted the army’s response despite the nationwide outcry.

“The security forces have never been drafted in the swift manner we now see in the crisis on the Mambila Plateau.  We suspect that this is a plot to annihilate the people of the area using security forces, as their entry into the area is in swift response to the Fulani call. Why did the army not take swift action in the long assault and killing of people in Agatu and all other places mentioned above? Are those killed in those places, not human beings? This is baffling outright.”

The group called on the security agencies “to immediately end the selective and arbitrary arrests and protection of individuals and particular groups in the ongoing crisis”.

“In the first place, they were used by certain persons to spark off the current crisis and must do all it takes to restore the people’s confidence in their intervention,” they said.

TWITTER @thecableng
Copyright 2020 TheCable. All rights reserved. This material, and other digital content on this website, may not be reproduced, published, broadcast, rewritten or redistributed in whole or in part without prior express written permission from TheCable.
Tags
clashfulanitaraba
Advertisement