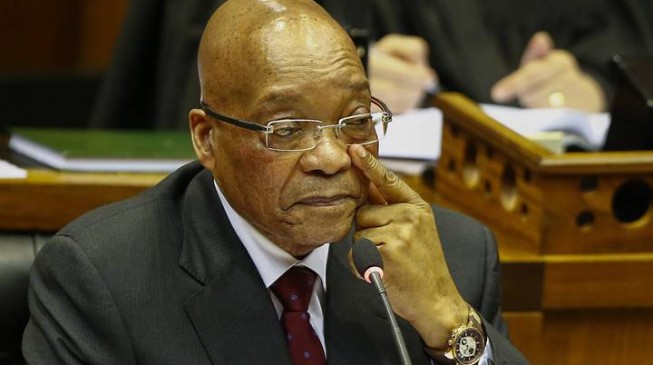 16:36 2016
Print This Article Share it With Friends
👤by News Agency  0 Comments
Advertisement

The South African parliament on Tuesday voted against an impeachment of President Jacob Zuma following his implication in a corruption scandal, news website News24 reported.

According to the report, 233 legislators voted against the motion to impeach Zuma, with 143 in favour and no abstentions.

The constitutional court said last week Zuma had violated the constitution when using about $15 million to upgrade his rural homestead in the town of Nkandla.

Zuma later apologised to the nation for the way he had used taxpayers’ money for upgrading his home but denied any conscious wrongdoing.

The proceedings were seen as a blow to Zuma, who became the first South African president to face an impeachment debate in parliament.

The president had argued that the house upgrade was for security purposes, but it also included a swimming pool, a cattle enclosure, a chicken coop, a visitors’ centre and an amphitheatre.

But DA leader Mmusi Maimane argued that corruption had infected the entire ANC “like cancer”.

Earlier, the session got a chaotic start as opposition party demanded that Baleka Mbete, speaker of the parliament, excuse herself from the debate.

“We are discussing Zuma now; we cannot discuss Zuma with you presiding over this matter,” said Juliu Malema, leader of the Economic Freedom Fighters (EFF).

The opposition claimed that Mbete had failed in her job by defending Zuma, saying it was not fair for her to preside over the debate.

Last Thursday, the supreme court of appeal ruled that Zuma had flouted the constitution by failing to repay some of the money spent on the renovation.

A 2014 report by the government-appointed Public Protector, Thuli Madonsela, found that Zuma and his family had “unduly benefited” from the upgrades and ordered him to pay back some of the money.

Zuma apologised in a national television address on Friday, but made it clear that he had no intention of responding to calls to resign.

He agreed to pay back some of the money as ordered.

The impeachment motion was lodged by the main opposition party, the Democratic Alliance, which drew unflattering comparisons between Zuma and iconic former ANC leader and president, Nelson Mandela.

TWITTER @thecableng
Copyright 2020 TheCable. All rights reserved. This material, and other digital content on this website, may not be reproduced, published, broadcast, rewritten or redistributed in whole or in part without prior express written permission from TheCable.
Tags
Jacob ZumaNelson MandelaSouth Africa
Advertisement

Nkurunziza, Burundian president, to get $530,000, luxury villa as retirement benefit