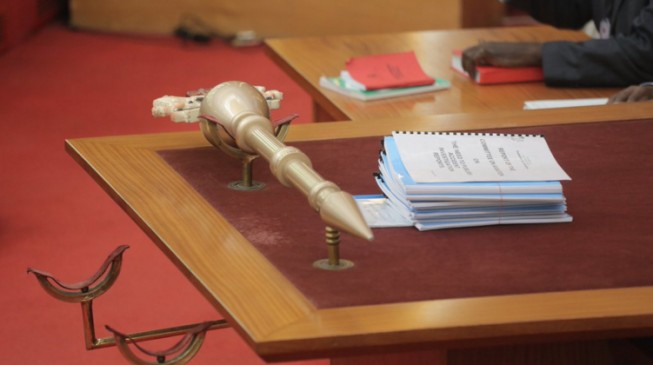 20:20 2019
Print This Article Share it With Friends
👤by Chinedu Asadu  0 Comments
Advertisement

There was chaos at the Adamawa state house of assembly as lawmakers attempted to commence impeachment proceeding against Jibrila Bindow, governor of the state.

The proceeding came to a halt after Kabiru Mijinyawa, speaker of the house, whose position was also threatened, absconded with the mace, bringing the sitting to an end.

Trouble started when the assembly reconvened after its one-month recess, and considered a letter from the governor.

Bindow in the letter informed the lawmakers that he was proceeding on a two-week leave abroad.

The letter was however, greeted with widespread criticism as the lawmakers queried why the governor was leaving at “this crucial period” when he was meant to account for his stay in office.

Some of the lawmakers accused the governor of “trying to run away” as his tenure comes to an end.

The situation degenerated when Hassan Barguma, majority leader, accused the speaker of being the “governor’s stooge” and requested him to “step aside so that an appropriate action can be taken concerning the governor.”

The speaker, with the assistance of the sergeant at arms, then quickly exited the chamber with the mace.

A source at the house of assembly said there were already plans to impeach the governor before the expiration of his tenure over some unresolved issues in the state.

Lamsambani Dili, the deputy speaker, however, denied the impeachment plot, saying the assembly adjourned hurriedly because the management was preparing an induction course for newly elected members.

The speaker had not responded to inquiries when this report was filed.

TWITTER @thecableng
Copyright 2019 TheCable. All rights reserved. This material, and other digital content on this website, may not be reproduced, published, broadcast, rewritten or redistributed in whole or in part without prior express written permission from TheCable.
Tags
AdamawaAdamawa assemblyJibrila Bindow
Advertisement