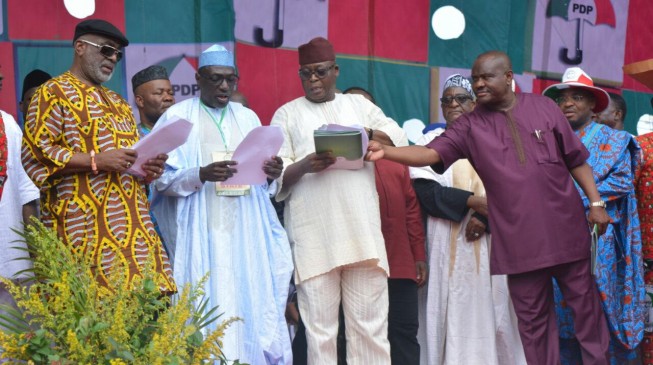 20:25 2016
Print This Article Share it With Friends
👤by Fredrick Nwabufo  3 Comments
Advertisement

The Ahmed Makarfi-led faction of the Peoples Democratic Party (PDP) says its convention in Port Harcourt will go on as planned despite “reckless” a court order stopping it.

In a statement on Monday, Dayo Adeyeye, spokesman of the faction, said the convention would take place because a federal high court in Port Harcourt had given a superior order for it to proceed.

Earlier, Okon Abang, justice of the federal high court, Abuja, had ruled that the convention be suspended pending the determination of an application by the Ali Modu Sheriff faction.

But a few hours later, spokesman of the Makarfi faction said that the convention, which is scheduled for Wednesday, would hold.

“Our attention has been drawn once again to another act of judicial recklessness by the honourable judge of the federal high court, Justice Okon Abang of the purported suspension of the PDP national convention holding in Port Harcourt, Rivers on Wednesday the 17 of August 2016,” he said.

“We wish to however state that a federal high court in Port Harcourt Rivers state has earlier in the day given a comprehensive order wherein the honourable judge specifically ordered the PDP to proceed with the convention as scheduled without hindrance.

“Indeed, his lordship while given the order mandated all relevant agencies including the Police, DSS and INEC to cooperate with the party in organising a hitch-free national convention.

“In the light of the above, The Peoples Democratic Party (PDP) as a law-abiding party is obeying the order of the Port Harcourt, federal high court until set aside by any competent court of jurisdiction.

“In view of the above, the 2016 repeat national convention of the Peoples Democratic Party (PDP) will continue as scheduled as we welcome all delegates, party leaders, other critical stakeholders, INEC monitoring team and other friends of PDP to Port Harcourt, Rivers state while wishing all our members and supporters a successful national convention.”

TWITTER @thecableng
Copyright 2020 TheCable. All rights reserved. This material, and other digital content on this website, may not be reproduced, published, broadcast, rewritten or redistributed in whole or in part without prior express written permission from TheCable.
Tags
Ahmed Makarfiali modu sheriffconventionPDP
Advertisement