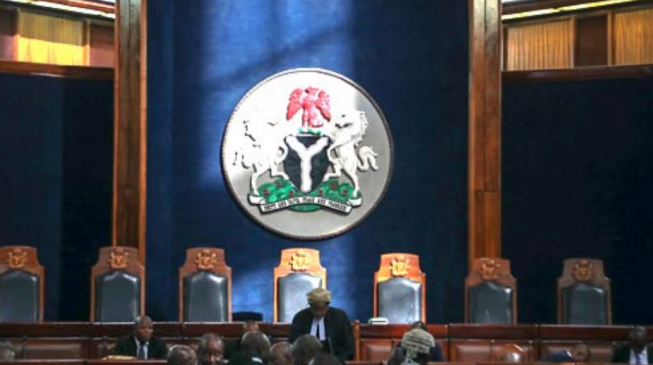 13:06 2020
Print This Article Share it With Friends
👤by Bolanle Olabimtan  0 Comments
Advertisement

The supreme court has fixed January 20 to deliver judgment in the appeal challenging Abdullahi Ganduje’s election as the governor of Kano state.

A seven-man panel led by Ibrahim Muhammad, the chief justice of Nigeria, fixed the date after hearing the arguments of the lawyers representing the parties in the case.

The party and its candidate approached the apex court after losing their case at the tribunal and the appeal court.

Adegboyega Awomolo, who represented the appellants, asked the court to nullify Ganduje’s election on the grounds that there were irregularities in the exercise.

He said the returning officer acted ultra vires when he declared the election inconclusive after announcing the results of 207 polling units.

He added that the rescheduling of the election to March 23, 2019 was also null and void.

Responding to the appellants’ arguments, Ahmed Raji, counsel to the Independent National Electoral Commission (INEC), said: “It is not correct that the returning officer cancelled the votes.”

“The evidence led neither supported nor proved their claim. Therefore, all the postulations suggesting the cancellation of results are not true.”

“What the record clearly shows is the inability of the returning officer to collate the results because he was prevented by agents of the appellant.

“I urge the court to dismiss their submissions.”

M.M Duru who argued for the governor said the exhibit upon which the appellants based their argument does not contain all the results of the 44 local government areas in Kano state.

“Form EC8D does not contain the results of the 207 polling units. Therefore, there is absolutely no way the returning officer could have declared the winner of the election,” he said.

He said Yakassai who the appellants called as their 30th witness admitted that he locked himself in a room with a pen after he made away with the original results for 62 polling units.

Duru said the witness took the results to the police station after almost two hours.

He said: “Allowing the appeal would mean sanctioning election violence, giving credit to somebody who has clearly violated the law and admitted the same.”

Duru asked the apex court to dismiss the appeal with a substantial cost of N5 million against the PDP and its candidate.

Alex Iziyon, counsel to the All Progressive Congress (APC),  asked the court to “discountenance the issues formulated by the appellants and dismiss their appeal”.

TWITTER @thecableng
Copyright 2020 TheCable. All rights reserved. This material, and other digital content on this website, may not be reproduced, published, broadcast, rewritten or redistributed in whole or in part without prior express written permission from TheCable.
Tags
GandujeKano State
Advertisement